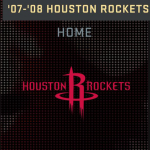 2K Sports has continued their reveal of new retro teams in NBA 2K16 this week, posting an image on Facebook and Twitter spotlighting two new historical squads: the 2000 Toronto Raptors, and 2008 Houston Rockets.

The addition of the 2000 Raptors had previously been revealed on an episode of NBA 2KTV, but the 2008 Rockets are a new confirmation. That Rockets team notably won 22 games in a row, which stood as the second longest winning streak in NBA history behind the 1972 Los Angeles Lakers 33 game streak, before the 2013 Miami Heat won 27 in a row. Their roster included Tracy McGrady, Yao Ming, Dikembe Mutombo, Steve Francis, Aaron Brooks, and Shane Battier, to mention a few noteworthy names,

What do you think of the 2008 Rockets being included, or any of the other confirmed historical teams? Have your say in the comments below, and join in the discussion here in our NBA 2K16 Forum.