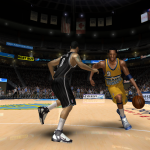 We’re well and truly in the final countdown to the release of the current roster updates for NBA Live 2005, NBA Live 06, NBA Live 07 and NBA Live 08. It will be a few more days until they are out but I’m basically down to polishing up some final details, making sure that everything is in place, finishing up the conversions and compiling all of the updates.

To put it in perspective, the NBA Live 08 roster is basically in a state where it could be released, but for the sake of quality control I’d like to spend a little more time updating some ratings and double-checking for errors. Depending on whether I run into any delays finishing up the conversions, I may stagger the releases with the update for NBA Live 08 coming out first and rest a day or so later, but at this time I’m looking at releasing all the updates at once sometime within the next few days.

Thanks again to everyone for their patience and support; we’re almost there!

Wow! Thanks man!
Really want to update my nba live08 game with the updated roster.

Aside from christmas this is the only thing that I’m looking forward to this year !! Thanks so much drew ! =D

Thanks for the update. Looking forward to them.

great news! thanks as always, ‘Drew…

thanks for all your hard work

Awesome! I can’t wait to play with the new rosters! Thank You!

The rosters for NBA Live 08 have been completed and are ready to go, so it’s full steam ahead with the conversions of NBA Live 2005-07! As I mentioned in the news post, I’m currently looking to release them all at once but if I do run into any delays with the conversions – which probably won’t set things back more than a day or so – the 08 rosters will come out by themselves, with staggered releases for the rest over the course of the next few days. Stay tuned.

When do you think you will post the NBA Live 08 rosters.
Estimated day and time if you can?
i have spring break and in my 4 days left i want to start a season with either the 2011-12 rosters or these new 2012-13 rosters if this new roster comes out today

You have done amazing work so far, no doubt this one is gonna be awesome, thanks for all the joy you have brought to us old-school gamers!!!!

will these rosters include court updates? thanks Andrew in advance for this amazing work!!!

Yes, the court updates from the community that have been posted as standalone updates will be included in the upcoming rosters.

Thanks Andrew for making these patch/updates. You really did a great job.
When will you think you post the 06 or 2005 updates?

As I said above, I’m hoping to have them all out sometime tomorrow. The 2005 update may be the day after at the latest, but so far so good. The 06 update is almost done, so these final stages are progressing fairly well and aside from some minor troubleshooting with problematic art updates, not posing too many problems.

Do you think the 08 rosters will be posted anytime in the next 4 hours?
But thanks for all your hard work
Much appreciated!

Definitely not, sorry. Still coming within the next day, progressing through the 2005 rosters right now so hopefully all should be out tomorrow. If not, 06-08 with 2005 the day after.

aw man
yesterday you said that the 08 rosters would be up in the next 24 hours so you had my hopes up.
i was hoping i could get a season underway since tomorrow is my last day of spring break.
but oh well good luck finishing up

I said they’d hopefully be out within the next 24 hours or so; that doesn’t mean they will definitely be out exactly 24 hours from the time you posted your comment, which was 5 in the morning yesterday in my timezone. I realise there can be some confusion there given the different timezones, so I apologise for the ambiguity. Please understand it’s tough to give a precise release time.

That said, I’m hoping to have all of the updates out later today (which would be early morning in the US). Worst case scenario, that’ll be the 06-08 updates and the 2005 update will come the day after.