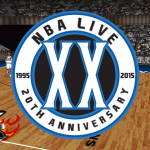 We’re picking up our 20th Anniversary of NBA Live celebrations once again with a clip from Episode #129 of the NLSC Podcast, in which I chatted to Sean O’Brien, Executive Producer of NBA Live. While the interview was mainly centred on NBA Live 16 – at the time, a couple of weeks away from its release – we also took some time out to talk about the history of the series, and Sean’s experience working on it, beginning with NBA Live 97. As noted in our chat, he was even featured as a cheat code in that game!

With such a long history working on the series, Sean definitely has some interesting stories to tell about how he got involved with the development of the game, and how things have changed over the years. He recalls his experiences providing motion capture back in 1996, and describes what it was like to develop a basketball game back in the 90s. In reminiscing about his experiences working on NBA Live, Sean also touches on the future of the series, mentioning that he’s excited about what he believes the team can do with the next couple of releases.

Catch it here on our YouTube channel if you’re having any issues with the embedded video. If you’d like to listen to the entire interview, you can tune in to Episode #129 of the NLSC Podcast here.