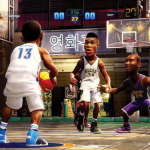 Following the release of the “Ball Without Limits” trailer, additional details on NBA 2K Playgrounds 2 have been revealed. Brian Mazique has rounded up that information, and posted it over on Forbes. As mentioned in our previous bulletin, the game will be released October 16th for PC, PlayStation 4, Xbox One, and Switch, but here are some other key points of interest:

As always, feel free to share your thoughts on how NBA 2K Playgrounds 2 is shaping up in the comments section below. You can also join in the conversation here in the NLSC Forum.