I’d just like to remind everyone once again about our recently relaunched Downloads section, which is integrated with the NLSC Forum. In relaunching the new section, we have weeded out all broken links and can now offer everyone the ability to upload files up to 100 MB in size for both NBA Live and NBA 2K, while immediately submitting them for inclusion in the database. Our aim is to provide the community with free file hosting without fear of work getting lost after a period of inactivity, which has been an issue in the past with patchers using various free hosting services around the Internet.

We’re keen to help out the modding communities for NBA Live and NBA 2K with tutorials, resources and file hosting, so please feel free to begin using the facilities; all you need is an NLSC Forum account to start uploading! If you have any questions or run into any problems, please drop us a line. If you have a file larger than 100 MB, by all means shoot me an email or PM so that we can make alternative arrangements.

Add your thoughts here in the Forum. 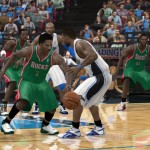 As Peter Moore mentioned earlier this week, it may take a while before EA’s future NBA sim games are able to compete with the NBA 2K series. However, here at the NLSC we’re looking to do our part by compiling a comprehensive Wishlist with detailed feedback for the new dev team at EA Tiburon. We’re also collecting additional feedback via our Wishlist Survey and attempting to stress the desire for a PC release with our PC Petition. We greatly appreciate everyone’s support with these initiatives so far, there’s still time to sign the Petition if you haven’t already and send in your feedback for the developers. Hopefully we can have a positive impact on the game!

2K Sports have posted another new NBA 2K12 screenshot featuring the starting lineups from an NBA’s Greatest game. This time it’s Patrick Ewing’s game that’s in the spotlight, as we get a glimpse of his 1995 New York Knicks and their opponents, Shaq and Penny’s Orlando Magic.

Join in the discussion of the NBA’s Greatest lineup screens here in the NLSC Forum.

The fourth Developer Insight for NBA 2K12 has been posted over on the official Facebook page. This week, Gameplay Director Rob Jones checks in to talk about the playcalling system in this year’s game. Of note, Rob talks about the assignment of plays to players rather than positions, diversity of play types, dynamic playbooks, updates to the playcalling menus, the new “Run Best Play” option, defensive adjustments, out of bounds plays and much more. The Insight also includes seven screenshots which give us a glimpse of the playbook menus and playcalling in action. It’s well worth a read to get the scoop on all the playcalling controls, options and AI in NBA 2K12, so check it out and join in the discussion here in the Forum.

As they’ve been doing every week for the past few weeks, EA Sports have posted some new NBA Jam: On Fire Edition screenshots here over on the official Facebook page. This week they’ve added three new screenshots spotlighting Monta Ellis, Rudy Gay and Brook Lopez. Share your thoughts in the comments or this thread in the Forum.

For those who didn’t catch it or would like to watch it again, the full September 2nd episode of GameTrailers TV which spotlights NBA 2K12 can now be found here over on GameTrailers.com. The first segment includes a chat with NBA 2K12 Vice President of Marketing Jason Argent in which he outlines the goals for this year’s game and features several highlight clips. The second segment, beginning at the 5:04 mark, features Gameplay Director Rob Jones talking about improvements to controls including the ability to break out of more animations, the fluidity when controlling the ballhandler and the new post-up controls along with more gameplay footage and a quick word on playcalling, AI and presentation.

The third segment begins around the 10:40 mark and covers NBA’s Greatest, with commentary from producer Eric Boenisch and footage from a few classic games which show off the retro video filters and scorebugs. The gameplay footage also offers a demonstration of the Shot Quality meter, which rates shots from A+ down to F. Check it out and add your thoughts in this thread in our NBA 2K12 section.