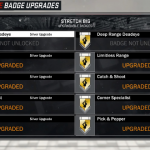 The week is in the dying minutes of the fourth quarter, which means it’s time for the Sunday Substitute! It’s the article where I get some valuable minutes while the star is resting on the bench. I might not have the time to do this every week, but I like to think I’m still contributing to the team effort. I have been gaining a few splinters on the bench for the last few months, but today I’m ready to get back into it and talk about badges in NBA 2K17.

Over the past few 2K PRO-AM sessions I have had with fellow NLSC team members, I have learned that badges are vital in online play. Both mine and Andrew’s numbers have gone up considerably since we’ve unlocked significant badges for our respective archetypes. In some games, my shooting has been off the charts because of my Hall of Fame Corner Specialist and Catch and Shoot Badges, and Andrew’s passes have been more on point with the Gold Dimer badge.

Despite how NLSC THRILLHO have improved after acquiring badges, there are still a number of issues that badges seem to be creating online. It seems like lesser-rated players are becoming more overpowered because of outside shooting badges. People are still zigzagging and hitting those perfect jump shots, and corner threes are almost automatic unless you practically foul the shooter.

Badges are a powerful thing to have, which means we must question how they are acquired. So instead of complaining on Twitter, I’ve decided to try and be a part of the solution. With that in mind, here are a few suggestions I have come up with to improve the badge system for future games in the NBA 2K series.

Hall of Fame Badges Should Be Harder to Achieve First of all, I want to state that I like Hall of Fame badges…and I’m not just saying that because I have two of them. I think they are a great way to reward users for excelling in a particular part of the game; whether it’s shooting, passing, defending, rebounding or any other aspect. In saying that, the way of obtaining Hall of Fame badges isn’t without its flaws.

I’ve seen tutorial videos for Hall of Fame badges on YouTube where it’s clear that the user is playing on the lowest difficulty possible. How do I know this? Contested shots with awful releases and shot grades were going in. I’ve also seen content creators encourage users to spam the parking lot threes in order to get the Limitless Range badge. One of the biggest problems with the Hall of Fame badge system is that it doesn’t encourage users to get the badges through their own merits on a Superstar or Hall of Fame difficulty.  Instead, users can get the badges quickly on a lower difficulty, go online and become those incredibly overpowered players we all love dearly.

If 2K wants to create a greater divide between the better 2K players and those who want to cheese the game, this needs to be addressed. Hall of Fame badges, much like 99 ratings, should be reserved for the elite. To ensure that this is the case, I believe they should only be attained by playing at a Superstar difficulty or higher. They could even go one further and make Hall of Fame badges for Hall of Fame difficulty players. Regardless of what 2K would choose to do, they need to find a way to keep Hall of Fame badges away from cheesy players.

All Badges Should Be Upgradable Over the course of NBA 2K17, I have accumulated almost 200,000 VC. A part of this is due to my complete refusal to buy packs in MyTEAM (thanks, Jarnell Stokes). Another reason is because of the badge limitations. Every archetype has 5 upgradable badges, while the rest can only reach the Bronze status. In NBA 2K16, I was upgrading all my badges to Gold as soon as I accumulated enough VC.

I have no problems with limitations on badges in general, as some player positions shouldn’t have particular badges. However, my issue with limitations is when your player is clearly elite in a certain area, but is limited to a Bronze badge. For example, my player averages over 2.5 blocks a game in MyCAREER on the Superstar difficulty setting. These numbers would suggest that he should have a Gold Rim Protector badge. But with the limitations in place, my player is stuck with having only a Bronze badge because he’s a Stretch Big.

There are two ways around this. The first way is to simply bring back the original upgrading system in NBA 2K16. This could encourage players to spend more VC, which means they could potentially buy more VC. However, I understand why 2K removed the user’s ability to do this, since they are looking to make the online part of the game more fair.

Achievement-Based Upgrading of Other Badges In terms of upgrading Bronze badges outside of a player’s archetype, another alternative could be to have a system where a player could reach Silver and Gold status through statistical milestones. For example, 150+ blocks in a season could unlock the Silver rim protector badge, while 2 or 3 seasons in a row of 150+ blocks could lead to Gold. Using a system like this could ensure that users who are committed to getting elite level badges are playing deep into the MyCAREER game mode and aren’t simply spamming certain moves. Furthermore, it would reward players who are skilled in areas outside of their archetype.

The achievement-based badge upgrading method could have the same problems that the Hall of Fame badges currently have with people achieving them through easy difficulties. But again, I’ll reiterate that my way around that would be to only allow people playing on higher difficulties to earn those higher-level badges.

What do you think of the badge system? Do you agree with my points, or do you think I’ve completely missed the mark on this one? Let me know in the comment section below!

When it comes to unlocking the Hall of Fame Badges, I’d be in favour of them being easier to unlock on Superstar and Hall of fame difficult, and more difficult to unlock on easier settings. That is, playing on the harder difficulty levels will give you a leg up in earning those Badges with a lower threshold or whatever, while playing on easier difficulty levels will require more of a grind and a longer time playing the game to get there. That way, no one’s locked out of getting the Badges, but the harder difficulty setting will reward players who accept the challenge.

I’d be in favour of achievement/statistics-based methods of upgrading Badges outside of the Archetype, too. That way, your player could evolve beyond a somewhat generic classification into more of a hybrid Archetype, or at least a player with a few noteworthy abilities outside of the usual skillset for their Archetype.