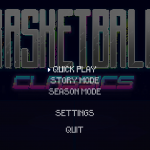 Basketball Classics, Namo Gamo’s retro-style hoops title currently available through Steam Early Access, has been updated to v0.8.0. The new version adds a Season mode with four save slots and comprehensive stats tracking. The Story mode from previous releases is also still available and is the means of unlocking the bonus teams, which include an NLSC squad!

Other key features of the latest update are as follows:

I had the pleasure of talking to Josh and Dave on an episode of the NLSC Podcast last year. Be sure to check it out for the backstory on Basketball Classics, and some of the other cool ideas that the guys have for the game. I’m looking forward to getting them back on the show in the not too distant future to talk about the latest version, especially now that the goal of adding a Season mode has been achieved.

If you’d like to check out Basketball Classics, you can pick it up here on Steam. It’s a game that I’d definitely recommend to anyone who grew up in the 8-bit and 16-bit era, and remembers titles such as Double Dribble. I’m also still working on a video on the game, so stay tuned for that. Let me know if you manage to beat the Phantom Five and unlock the NLSC squad!