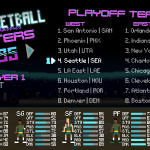 Exciting news! Basketball Classics is fast approaching a full release on Steam, and in the meantime, has received a new update. Version 0.8.1 is a content update for the game, and will come through automatically as long as you’re online when you fire up Steam.

Three seasons have been added to the roster: 1995, 2011, and 2019. This amounts to 240 new players spanning 48 teams, complete with new uniforms and individual attributes. These new teams are playable in both exhibition and the new Season mode that was added in the previous update.

You’ll also find signature shoes on some of the best players in the game, and some teams have also coordinated their style. This has been done to make players further stand out from one another visually, as well as in their abilities.

As I’ve said before, Basketball Classics is a great retro-oriented hoops game for PC that combines some modern mechanics with an old school aesthetic. It launched through Steam Early Access in a very impressive state, and has only gotten better since then. I’d definitely recommend checking it out, and am looking forward to the full release. For more insights into the development of the game, check out our chat with Josh and Dave!