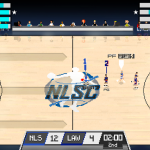 Exciting news today as Basketball Classics v1.0 has been released, meaning that the game is officially out of Early Access! To celebrate the launch, you can currently pick it up on Steam at a 30% discount. Key updates in v1.0 are as follows:

Congratulations to Josh and Dave from Namo Gamo on the launch of Basketball Classics v1.0! It’s been an honour and a lot of fun to be a small part of the journey, and great to see years of hard work come to fruition with such an awesome game. Pick it up here on Steam, and feel free to share your thoughts in the comments below, as well as join in the discussion here in the NLSC Forum. If you haven’t listened to my interview with Josh and Dave on the NLSC Podcast yet, be sure to tune in here.