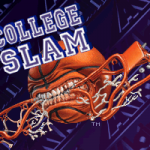 This is Wayback Wednesday, your midweek blast from the past! In this feature, we dig into the archives, look back at the history of basketball gaming, and indulge in some nostalgia. Check in every Wednesday for retrospectives and other features on older versions of NBA Live, NBA 2K, and old school basketball video games in general. You’ll also find old NLSC editorials re-published with added commentary, and other flashback content. This week, I’m taking a look back at College Slam.

College Slam is a 1996 title that a lot of basketball gamers may not remember, if indeed they’ve ever heard of it. I personally wasn’t aware of it until years later, since as is the case with all college basketball video games, it wasn’t available in PAL regions. Essentially an NCAA version of NBA Jam, it was developed by Iguana Entertainment and published by Acclaim, the companies who brought NBA Jam to home consoles and PC. Unlike NBA Jam, it wasn’t released in arcades, and never achieved the same level of popularity, largely due to its more limited release.

In many ways, College Slam is a re-skin of NBA Jam with NCAA licensing, but that is selling the game a little short. It did introduce a few new features that set it apart from its NBA licensed predecessor, and make it an interesting game to revisit. If the 2003 release from Acclaim is the forgotten NBA Jam, then College Slam is surely the forgotten spin-off. It’s another game worth remembering however, so let’s take a look back…way back…