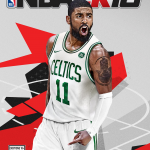 2K Sports have revealed the new cover art for NBA 2K18, featuring Kyrie Irving in a Boston Celtics jersey. Following the trade between the Celtics and Cleveland Cavaliers, 2K indicated that they would be issuing a new cover “at a later date”. While the digital cover art and icon for the game will be updated upon launch, physical copies won’t feature the new cover art until the initial stock is depleted.

Although it isn’t unprecedented in sports games, cover players changing teams before the game is even released is a rare occurrence. Several players have been traded the year after appearing on the cover of a basketball video game, and Ray Allen was traded halfway through the 2003 season, during which he was the cover player for NBA ShootOut 2002.

The ShootOut series also features the only other cover player for a basketball game to be traded before the game’s release, as the 2002 version featured Stephon Marbury in his New Jersey Nets uniform despite his offseason trade to the Phoenix Suns. Similar to NBA 2K18, an updated cover was later issued.

You can check out the full cover art below. We’re a week away from the release of NBA 2K18, but only a couple of hours away from the release of The Prelude! If you’re on PlayStation 4 or Xbox One and would like to get a head start on MyCAREER, be sure to check it out when it launches at 12:01 AM EST. The MyNBA2K18 app is also now available for Android and iOS devices, so pick it up to scan your face into the game, and earn extra VC through various mini-games.

END_OF_DOCUMENT_TOKEN_TO_BE_REPLACED

The Prelude Trailer, MyNBA2K18 Out Now 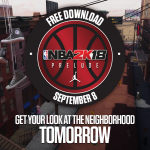 In less than 24 hours, we’ll be able to get our hands on The Prelude for NBA 2K18. The free to play preview for NBA 2K18 will be available globally on PlayStation 4 and Xbox One, and will provide gamers with a head start on MyCAREER, as well as an early look at The Neighborhood. It will be released at 12:01 AM EST globally, so unlike the NBA Live 18 demo, you can’t snag it earlier by creating a New Zealand account.

To hype up the release of The Prelude, 2K has dropped a new trailer. It emphasises the general concept of working your way up from the streets to the glamour of the NBA, and features clips of The Proving Ground, which will be integral to the beginning of this year’s MyCAREER story.

Additionally, the MyNBA2K18 companion app is now available for Android and iOS devices. In addition to being used to scan your face for The Prelude and NBA 2K18, it includes the familiar trading card game and other features that allow you to earn Virtual Currency. If you still have the MyNBA2K17 app installed, you may want to uninstall it before installing the MyNBA2K18 app, just to avoid any potential issues.

Got any thoughts on the trailer? Feel free to share them in the comments section below, as well as join in the discussion about The Prelude and other NBA 2K18-related topics here in our Forum. 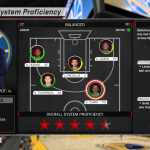 A new developer blog for NBA 2K18 has been posted exclusively over at Operation Sports. The latest insight is from Scott O’Gallagher, with OG breaking down the improvements to artificial intelligence in this year’s game. It’s a lengthy read with some great news and detailed information, and as such, it’s hard to do it justice with a quick summary. However, here are some of the key points that Scott touches upon:

Scott has also included a bunch of brief gameplay clips that demonstrate exactly what he’s talking about. Be sure to check out the blog on OS for the full scoop!

As always, feel free to share your thoughts in the comments section below, as well as in the NBA 2K18 section of the NLSC Forum!