NBA 2K11 remains one of the most popular games in the NBA 2K series, and as such, we’re still getting the occasional upload for it. If you’re still playing the PlayStation 3 version of the game, be sure to check out a new update from Jeffx, featuring end of season rosters.

In last week’s Friday Five, I talked about five players who suffered from the proverbial “cover curse” after gracing the covers of various basketball video games. It was definitely a fun topic to talk about, and I was reminded of one or two other “cursed” players in the comments section. If you can think of any other players who were hit by misfortune after appearing on the cover of a basketball game, be sure to check out last week’s article, and let me know.

I’m looking on the bright side this week, as I’m offering up a list of who I believe to be the best basketball video game cover players that we’ve had so far. I’ve made these picks according to a few factors: magnitude of stardom, their level of success around the time they appeared on the cover, and yes, there’s some personal bias in there as well. So, without any further ado, I present my choices for the five best basketball video game cover players!

END_OF_DOCUMENT_TOKEN_TO_BE_REPLACED

This week marked the 20th Anniversary of Michael Jordan’s first comeback, one of the most significant events for basketball fans like myself who grew up watching the NBA in the 90s. There was no hour long special, no social media and thus no hashtags, and no lengthy speeches. No, His Airness’ return to the hardwood was simply announced in two words: “I’m Back”.

Michael Jordan’s history with basketball video games is kind of interesting to look back upon, as it’s a situation that must seem very foreign to younger gamers. The idea that the league’s best player and one of its marquee attractions would not be featured in an NBA licensed game is quite unusual, and thankfully no longer an issue we have to deal with. So, in honour of a milestone that makes me feel old, and in the interest of indulging my nostalgia for both Michael Jordan and basketball video games, this week’s Friday Five is taking a look back at MJ’s presence on the virtual hardwood.

END_OF_DOCUMENT_TOKEN_TO_BE_REPLACED

If you happen to be still playing NBA 2K11 on PlayStation 3, and would like to play with updated 2014/2015 rosters, then be sure to check out the latest upload from Jeffx, featuring rosters that have been updated through the trade deadline. Please note, this release is for the PS3 version of NBA 2K11 only. Check it out at the link below!

levynagy has some great releases lined up for NBA 2K11 PC, starting with this pack of faces converted from NBA 2K14. If you’re still playing the game, or would like to dust it off, be sure to pick up the pack at the link below!

If you’re still playing NBA 2K11 PC, then you might want to check out the latest version of Levy’s Sliders, which are optimised for realistic performance. Pick up the file at the link below!

It’s not very often that we get new file additions for NBA 2K11 these days, but a new 2014/2015 roster update has been uploaded today. You can check it out at the link below!

A couple of new updates for NBA 2K11 PC have been uploaded to our database: a pack of ESPN Team Logos, and a work-in-progress roster update for the 2014/2015 season. You can download them both at the links below.

For those who are still playing NBA 2K11 PC, or would like to check it out again, levynagy has updated his set of sliders. You can check them out at the link below!

Still playing NBA 2K11 on PC and want to enhance your game? Check out the latest version of Levy’s Sliders, available at the link below!

It isn’t very often that we get an upload for PlayStation 3, but that’s what we have in today’s additions for NBA 2K11. Jeffx has uploaded a current roster update for the PS3 version of the game, which you can check out at the link below. 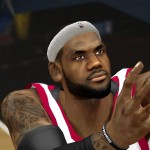 If you’ve been wondering how to make high quality face updates for the NBA 2K series, wonder no longer! R4zoR has posted an in-depth tutorial explaining the process, along with a resource pack for Blender and Photoshop. You can check out the tutorial here and download the pack here; a huge thanks once again to R4zoR for his efforts, and willingness to share his knowledge with the modding community!

As a general reminder, we’re always keen to expand our resources for new people who wish to try their hand at patching NBA Live and NBA 2K, so if you’re an experienced modder we would greatly appreciate your assistance in creating tutorials and resources. Feel free to post any guides in the Forum, upload any template and resource packs to the Downloads section, and of course, create articles in our Wiki.

For those of you who are still playing NBA 2K11 on PC, LJ has released a new headshape for Manu Ginobili. Pick it up at the link below!

The efforts to keep NBA 2K11 up to date continue, as LJ has released a couple of new face updates for Serge Ibaka and Steven Adams of the Oklahoma City Thunder. Pick them up in the one pack at the link below!