In years gone by, a few people have been upset that our Wishlists for NBA Live haven’t really paid much attention to online features. There are a couple of reasons for that: first of all, a lot of improvements to the online experience also fall under the category of gameplay fixes, and thus don’t bear repeating in another section of the Wishlist. Secondly, I have to admit that improvements related to online play don’t spring immediately to my mind, because I’m still mainly an offline player. As such, I encourage anyone who is primarily an online gamer to post their feedback, as it’s an area of the game that I’m prone to overlook.

Given the popularity of online play, the strong desire to see proper online leagues implemented, and the outcry when there was dissatisfaction over Crew Mode, I’m guessing the preference that I and many others still have for single player/offline play may be puzzling to a lot of online gamers. So, in this week’s Friday Five, I’m listing the five reasons that I rarely play online.

END_OF_DOCUMENT_TOKEN_TO_BE_REPLACED

Let’s tip off the file additions this year with some new releases for NBA 2K15 PC! Manni has uploaded an updated court for the Atlanta Hawks, while Krhymes has added a new version of his face and tattoo update for Allen Iverson. Download both files at the links below! 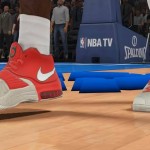 Arcane has discovered an irritating glitch with custom shoes in NBA 2K15’s MyCAREER, which appears to have occurred as a result of the third patch.

In a nutshell, your player is stuck with the shoes they were wearing before the third patch was installed, even if you purchase or re-purchase different pairs. It also appears as though there may be a couple of issues when trying to edit custom shoes.

Fortunately, it seems that there is a viable workaround, which Arcane has demonstrated in a new video. Check it out below, or watch it over on YouTube if you can’t see it embedded here.

If you have any feedback or further questions, please feel free to use the comments section, as well as this thread in the NBA 2K15 section of the Forum. 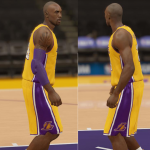 KevinParker has uploaded some new resources for creating quality jersey updates for NBA 2K15 PC, specifically REV 30 mesh textures for both the jerseys and the shorts. You can download them here:

Additionally, Kevin has created a couple of tutorials explaining how to use the textures, as well as how to edit jersey colours:

Thanks to Kevin for sharing his knowledge and these resources with the modding community!

Another year is almost over, and with next Friday being January 2nd, this week marks the final edition of The Friday Five for 2014. It’s certainly been a fun and interesting year here at the NLSC, so I wanted to use this week’s column to reflect on the past twelve months, throw out a couple of “Best Of”/”Editor’s Picks” lists, and look ahead to what’s in store for 2015.

Before I go on, a big thank you to everyone who checks out The Friday Five each week, spreads the word about it on social media, and comments on the articles themselves. I enjoy writing the Five and (hopefully) giving you all something interesting and entertaining to read every week, so I really do appreciate your support of the feature. With that said, let’s get started with the Year In Review of 2014!

END_OF_DOCUMENT_TOKEN_TO_BE_REPLACED 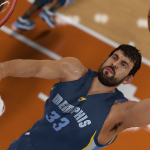 The third patch for NBA 2K15 has finally been approved by Microsoft, and will now be pushed through as long as your Xbox One is connected to the Internet.

The latest #NBA2K15 patch is now available on PS4, Xbox One, and PC. Read the full patch notes here – http://t.co/JfiKeLgUBR

For a full list of patch notes, please see our previous bulletin. Feel free to discuss the patch in the comments section below, as well as in this thread in the NBA 2K15 section of the NLSC Forum.

The range of mods for NBA 2K15 PC continues to expand with the latest additions, which include a court update for the Golden State Warriors, and three jersey updates for the Los Angeles Lakers. Pick them all up at the links below!

The Friday Five: 5 Buzzwords We Need To Retire (And Why)

In this week’s Friday Five, I’m taking a look at some buzzwords that have entered common usage within the basketball gaming community. My feeling is that these words do nothing for our credibility as gamers and consumers, and only serve to stifle our ability to properly evaluate basketball games. These words are ill-defined and overused, to the point where they fail to be constructive, or in some cases, accurate.

I’d like to clarify that I’m not writing this article in an attempt to suck up to any video game developers, or indiscriminately dismiss criticism of the games themselves. That doesn’t do us any favours as consumers. However, I also believe that as a community, we should pride ourselves on having expert knowledge of basketball games, as well as the ability to properly critique and provide constructive feedback on them. To that end, here are five buzzwords that I think we need to retire, or at the very least, restrict our usage of.

END_OF_DOCUMENT_TOKEN_TO_BE_REPLACED

Episode #105 of the NLSC Podcast is out now, hosted by Arcane and myself. This week, we talk about the patches for NBA Live 15 and NBA 2K15, once again reflect on realism in basketball video games, and give our thoughts on the latest NBA news and results. This will likely be our final episode for 2014, so a huge thank you to everyone has tuned in this year. Please join us again in 2015!

As always, we welcome your thoughts on this week’s show, as well as any of the topics that we discussed. Have your say in the comments below, or here in the Forum! Mailbag submissions and topic suggestions are also welcome, so feel free to hit us up in this thread. 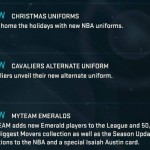 This year’s Christmas jerseys have now been added to NBA 2K15, along with the Cleveland Cavaliers’ new alternate jersey. The jerseys can be used in all modes and at any time, and are available in the PC, PlayStation 4, and Xbox One versions of the game.

Several new Emerald player cards have also been added to MyTEAM, including Isaiah Austin. As many of you are probably aware, Austin was a top prospect in last year’s Draft, but his basketball career was ended prematurely when he was diagnosed with Marfan syndrome. However, 2K Sports has added him to the game as a free agent and a collectible player in MyTEAM, complete with a face scan. Austin also appeared on the latest episode of 2KTV.

As always, the new content should be pushed through automatically when you fire up NBA 2K15, as long as your PC or console is connected to the Internet.

Several new mods for NBA 2K15 PC have been added to our Downloads section, all of them player face updates. Check out all of the latest additions at the links below!

The Tuesday Triple: How We Handle Realism in Basketball Video Games

This is The Tuesday Triple! Originally, it was JaoSming’s answer to The Friday Five, but now that he’s at Visual Concepts working on 2KTV, it’s up for grabs whenever I have a topic that I’d like to cover in three points instead of five, or I can’t think of five items for a list or countdown. On this occasion, I’m using it to talk about how we handle realism in basketball video games.

Do we really, though? Do we appreciate the realism that’s already present in basketball video games? Do we truly realise what realism means for the basketball gaming experience? Do we really know what we want?

END_OF_DOCUMENT_TOKEN_TO_BE_REPLACED

We have a few new face updates for NBA 2K15 PC in today’s additions: a couple of different looks for Kobe Bryant, who has just passed Michael Jordan for third on the all-time regular season scoring leaders, and a new face for fellow Class of 1996 alum Allen Iverson. You can pick them all up at the links below.

More mods for NBA 2K15 PC are starting to be released by our talented community, including court updates, faces, jerseys, and even a custom net. Check out the latest additions at the link below!

Following a two week hiatus, the NLSC Podcast is back with Episode #104! Arcane and I are your hosts this week, as we discuss the latest NBA Live 15 and NBA 2K15 news, what we’ve been playing lately, and the latest happenings around the NBA.

As always, we welcome your thoughts on this week’s show, as well as any of the topics that we discussed. Have your say in the comments below, or here in the Forum! Mailbag submissions and topic suggestions are also welcome, so feel free to hit us up in this thread.