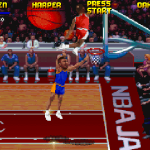 I’ve mentioned NBA Jam Tournament Edition a few times in previous features, as it’s one of my all-time favourite basketball video games, and in my opinion, one of the best arcade hoops games ever made. Appropriately enough, it was the subject of my first video feature for Wayback Wednesday. In that video, I mentioned that I once tried my hand at modding the game, as I wanted to replace Ron Harper with Michael Jordan.

Although I wouldn’t actually discover and get into the patching scene until my family first connected to the Internet in 1997 and I subsequently found the NLSC, those attempts to modify NBA Jam TE were an early indication of my interest in tinkering with basketball video games. I wasn’t successful in my efforts, and having looked into the matter again now that I know a bit more about modding, it unfortunately doesn’t appear to be feasible…at least with the PC version.

So, for this week’s Wayback Wednesday, I’m taking a look back at my early attempts to mod NBA Jam Tournament Edition on PC, as well as my more recent investigations. Let’s take a look back…way back…

END_OF_DOCUMENT_TOKEN_TO_BE_REPLACED 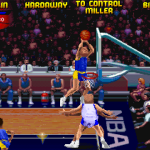 In this week’s Wayback Wednesday, I’m taking a look back at the PC version of NBA Jam Tournament Edition, with some unscripted commentary on a game I played a few years ago. Building on the success of the original game, NBA Jam Tournament Edition – often called NBA Jam TE for short – brought updated rosters and a few new features to the table, all in all proving to be a worthy follow-up to an all-time classic. As I’ve been sitting on this footage for a while and I’ve wanted to do more video content here at the NLSC, it seemed like a good way of providing a retrospective of one of my all-time favourite basketball video games. I hope you enjoy it!

With that said, let’s take a look back…way back…

Check it out here on our YouTube channel if you can’t see the embedded video. You can expect to see more video content, including game retrospectives, in the not too distant future!