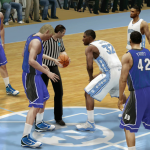 We’re at midcourt, and the ball is about to go up…it’s Monday Tip-Off! Join me as I begin the week here at the NLSC with my opinions and commentary on basketball gaming topics, as well as tales of the fun I’ve been having on the virtual hardwood. This week, I’m tipping things off with my thoughts on the prospect of EA Sports using college basketball as a springboard for their return to the virtual hardwood.

Excluding the mobile version of NBA Live, we haven’t seen a new basketball video game from EA Sports since 2018. There was time when such a thing seemed like an unthinkable prospect. Sure, NBA Live had had a rough release here or there, and NBA 2K steadily rose to become the premier brand by the end of the 2000s. We still expected a basketball game from EA, though; two in fact! With the NCAA series ending in 2009, and NBA Live missing several years beginning with the cancellation of NBA Elite 11, we’ve grown accustomed to their hoops titles being benched.

Not everyone has a problem with that. For some gamers, it’s EA Sports’ just deserts after failing to develop a satisfactory basketball title, or perhaps moving away from the PC platform (or indeed, both). I do understand that sentiment. However, for all the good things that NBA 2K has done, we’ve seen the downside of 2K having a virtual monopoly over the virtual hardwood. Unfortunately, while there would be a benefit to competition and choice in the space, NBA Live has not been able to deliver and be that viable alternative. With that in mind, eschewing the NBA in favour of a new college basketball game could prove to be EA Sports’ best move at this juncture.