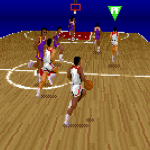 This is Wayback Wednesday, your midweek blast from the past! In this feature, we dig into the archives, look back at the history of basketball gaming, and indulge in some nostalgia. Check in every Wednesday for retrospectives and other features on older versions of NBA Live, NBA 2K, and old school basketball video games in general. You’ll also find old NLSC editorials re-published with added commentary, and other flashback content. This week, I’m taking a look back at the teams in Super Dunk Shot.

One of the first games I covered in a video retrospective for Wayback Wednesday was World League Basketball. It’s the PAL release of Sculptured Software’s NCAA Basketball for the Super Nintendo, replacing the college teams and tournament with a fictional global basketball league. The change was made because no college sports games have been licensed for release outside of North America, but the Japanese version – Super Dunk Shot – made an even crazier alteration to the teams. The game is basically a bootleg NBA title, from the season structure to the teams and players.

I’ve talked about the names of teams in Super Dunk Shot in previous articles and on the NLSC Podcast, but I believe they deserve their own feature. Some of the names really are ridiculous, but in the best possible way. These days I have all three versions of the game in my collection, but I wish I had them all those years ago. I loved World League Basketball, but I would’ve spent a lot of time with a college hoops and bootleg NBA game as well. Again, the teams in Super Dunk Shot deserve to be spotlighted, so Division by Division, let’s take a look back…way back…