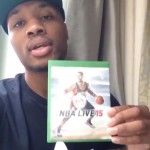 Portland Trail Blazer Damian Lillard has announced via his Instagram that he will be NBA Live 15’s cover athlete. In the announcement video, he shows off a generic Xbox One game case with the game’s cover inside. In the description, he also mentions that he has been playing EA basketball games since the 16-bit days, so it is definitely nice to have an athlete on the cover of an NBA Live game that has played them since nearly the beginning. Lillard has also been involved and featured in many of the previews for both NBA Live 14 and NBA Live 15.

Big thanks to [Ricoy] for letting us know in the NLSC Forum. Feel free to join the discussion in the comments below or in our NBA Live 15 Forum.

UPDATE: Check out the official cover art below! […] There's a Blazer on the cover of a video game. I'm not kidding… Damian Lillard Announced as NBA Live 15?s Cover Athlete | NLSC […]

And there you have it.