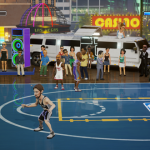 Following last week’s teaser, the big new content update for NBA Playgrounds has been officially announced. In an interview with Game Informer, Saber Interactive’s Matthew Karch revealed some details on the forthcoming fixes and content updates for the game. He also mentions the game’s success, noting that so far it has sold a combined 500,000 copies on PC, PlayStation 4, Nintendo Switch, and Xbox One, and touches on the possibility of sequels down the road.

One of the improvements that we can expect is a further tweak to pack odds, guaranteeing that new players will be included in all packs. Matthew also noted the possibility of including a one-time “pay to unlock everyone” option, though he admits that he’s not a big fan of such mechanics. A preview video has also confirmed improvements to the rebounding system, 33 new players (including commentator Ian Eagle), friend invitations, and a three-point shootout. The possibility of adding a three-point shootout post-release had been mentioned in previews of the game.

There isn’t a specific release date for the update at this time, except to say that it will be coming “later this Summer” (or Winter, for those of us in the Southern Hemisphere). When the update does drop however, it will be available on all four platforms.

What do you think of NBA Playgrounds so far, and the new update that’s in the pipeline? Have your say in the comments section below, as well as in this topic in the NLSC Forum. Thanks to zzcoolj21 for the heads up!

I have been impressed with the communication the devs of this title have shown as well as the continued game development.

I hate to heap too much praise without having played the update, but could this upstart have a better playable three-point competition from the front-end than either LIVE or 2K?

Agreed. I felt a little underwhelmed when I first played the game, but even though I still don’t agree with every design choice (or believe it’s surpassed the best Jam and Street games, yet), it’s really improved. Their communication has definitely been great.

Having an easily accessible three-point contest is definitely better than 2K’s current handling of the All-Star events, though I reckon Live’s All-Star Weekend mode from 2005-09 reigns supreme. But this is looking good, too.