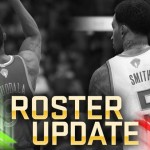 New rosters have come through for NBA Live 15, containing updated line-ups and ratings, though the latest update does not reflect Game 6 of the 2015 NBA Finals. The June 18th NBA Live 15 roster contains over 150 ratings changes and six player accessory updates, including a sleeve for LeBron James, and KD7s for Kevin Durant. For a full breakdown of the changes in the latest roster, check out this spreadsheet.

Not surprisingly, NBA Finals MVP Andre Iguodala is one of the players in the spotlight this week, receiving nine points in ratings boosts and currently sitting at 84 overall. On the other side of the ledger, J.R. Smith’s struggles shooting the ball in the championship round have seen his ratings drop, resulting in an overall rating of 82.

It remains to be seen whether NBA Live 15 will receive any more roster updates, including an offseason roster update as NBA Live 14 did last year. If you’ve got any thoughts on the latest NBA Live 15 roster that you’d care to share, feel free to leave them in the comments section below, as well as here in the NBA Live 15 section of the Forum.