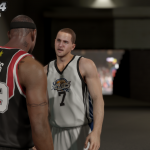 There is no doubt that the biggest advantage to playing the PC version of our annual basketball video games is to customize our experiences to our liking. We can play on new street courts, make the game overly arcadey, or pour hours into fixing issues with the game. A key component to most of these advantages is our ability to view and edit the rosters and other save files of these games. While the main purpose of editing may be to do something else, I have previously covered that it is easy to stumble upon unused content with the PC version of these games, and the game’s roster is no different. Let’s take a look at some of the hidden players located in 2K’s Official updates.

Everyone’s favorite rival in the PlayStation 4 and Xbox One versions of NBA 2K14 shows up in all versions of the roster updates. Located at the “bottom” of the roster, according to RED MC, Mr. Ellis comes with some low ratings, signature animations, specific tendencies, but no signature skills. He isn’t the only carryover from the next gen game though, as the lone celebrity from that version’s Blacktop mode Cliff Paul (Chris Paul’s State Farm alter ego) is also in the rosters. Unfortunately, neither Jackson or Cliff come with a cyberface in the PC installation or console discs. Boooooo. They tried stopping LeBron, we don’t like that…..

Yes, the LeBron’s Path to Greatness mode’s rivals actually show up right next to the Jackson Ellis clones in the roster. These guys all share the same ratings and animations, and do not have their signature skills either. However their faces are, obviously, available.

The other hidden content is probably the most useful to patchers. There are just over 100 players that have RED MC’s “IsUnused” tag applied to them, including the likes of Rasheed Wallace, Gilbert Arenas, Tracy McGrady, Darko Milicic, Baron Davis, Brandon Roy, Adam Morrison, and the White Mamba himself Brian Scalabrine. There is also the player version of Jason Kidd,  an unknown version of Michael Jordan, and the bases of the female heads used during MyCAREER press conferences, 2K developers Lu Su and Nikki Lukas. Finally, the defunct NBA 2K developer team is also still in the roster, including Mike Wang, but missing a certain bearded fellow.

Exploring these things are always fun, but this pool of hidden players has been very helpful for me in the past when making my various mods. From the All Pro Basketball mod, to the street mods, this has always allowed me to easily create some recently retired players without much effort. I hope you enjoyed this Dumb Fact, and if you have any other favorite things hidden in 2K’s or EA’s files, let me know in the comments below.

Creating a Leftos does seem like an appropriate replacement for Path to Greatness.

Having done the roster updates for NBA Live for all those years, my favourite hidden content would probably be the leftover audio for players and coaches. It’s certainly been helpful in adding a little extra detail.

The dummied out classic teams in NBA Live 08 are worth a mention as well, though I never got around to doing anything with them in the updates.

What are the cyberface ID’s of Dimitris Drakos,Ekon Okoye and John Trice?

I can imagine the game version of Leftos having a custom stat named “Beard” and it’s maxed at 100.