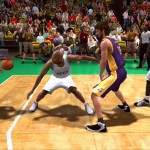 I think we can all agree that the biggest downfall of not only basketball video games, but all sport video games, is that they become obsolete after only one year of relevance. Usually the game’s users will get one final roster update after the NBA Finals are finished to remove any injuries in the roster, but if you want to play with the newest rookies a community created roster is normally your only choice. However, there were two simulation basketball video games that did receive official roster updates one full year after their release year. Probably the less surprising game to feature this additional year of updates is NBA Live 10. Fresh off the demise of NBA Elite 11, EA reassured fans of the series that NBA Live 10 would get fresh rosters and DNA data through Synergy for the entire 2010-2011 season, and they followed through with that promise. Of course, in hindsight, this was to lead in to the series’ return for the following season, which unfortunately did not happen. A bit more surprising is that the previous game, NBA Live 09, also received roster updates throughout the 2009-2010 NBA season. Unlike NBA Live 10 filling in for the absent NBA Elite 11, NBA Live 09 had no advertised or explained reason to be updated that additional season. Someone could have simply forgotten to flip the switch that turned the updates off, but rookies like Blake Griffin were added and could be given one of 9 generic faces by the user. It also seemed purposeful move by EA Sports as the additional year of NBA Live 10 updates for the 2010-2011 season did not apply to NBA Live 09, unfortunately.

Hope you enjoyed learning about what was probably a twice in a lifetime experience for this genre of games. I also want to note that NBA Jam: On Fire Edition did receive updates over a year after its release, and NBA Jam mobile recently updated for this current season, 2 years after its release! If you know of any other basketball games that got official roster updates over a year after release, please let me know in the comments. I hope you enjoyed reading these Dumb Facts!

I did of course know about those two games, can’t say I’m unaware of any others though. Perhaps worth mentioning though, I fired up NBA 2K13 a few days ago to check on something for one of my own upcoming articles and noticed that the games listed for NBA Today were actually correct for that day in the current season. I assume that will end once the servers are shut down for NBA 2K13, which was set for March 31st.