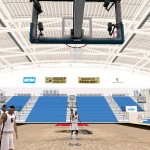 One of my favorite things about getting the PC version of our yearly NBA games is to see what hidden or unused content got left on the game disc. Sometimes there is nothing useful, but NBA 2K10 provided the community with a bunch of hidden files that, along with the initial release of REDitor, kickstarted NBA 2K modding on PC. Hidden in the thousands of game files were a few college gyms that had no business showing up in the yearly NBA 2K game. As the title suggests, some of the NCAA stadiums from the College Hoops series ended up in the NBA 2K files among other files. Being specific, they were PS2 version gyms of the freshly canceled College Hoops 2K8 game. Stripped entirely of crowd, shading, and other key stadium features, NBA 2K10 would load the stadiums, but they were really barely useable at best. That didn’t stop me, of course, from getting the files working in NBA 2K10’s Blacktop mode, as well as the other hidden PS2 stadiums (e.g. Practice Gym, Summer Circuit Gym, San Francisco Street Court). So while they were never very useful for that year’s NCAA mod or other modding breakthroughs, it was neat to play with these courts the only year they were available in the game’s files. I hope you enjoyed this week’s Dumb Fact Monday, a series that will undoubtedly cover more hidden content from PC basketball games in the future. Let me know how you’re enjoying the series in the comments below, and in the Forum Thread. Thanks for reading!

Since I haven’t had much to do with NBA 2K modding thus far, that one’s news to me. Generally speaking though, it is fun to find assets like that dummied out or hidden on the disc, and certainly useful to our community. Looking forward to seeing what other hidden content you talk about in future DFMs.