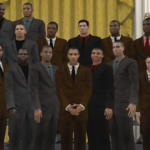 President Obama showing up in NBA 2K video games is something, I at least hope, most of us know about. 2K Sports touted his cameo when he debuted NBA 2K11’s Association Mode, showing up in a series of photo-op images with that year’s virtual NBA Champions. It is a great presentation addition, even if he continues to show up years after 2016. Since those photo-ops are rendered in-game, that means Obama has a cyberface file on-disc, which of course begs for unofficial mods, and even Obama getting into coaching with a bug in NBA 2K12.

As I said, having Obama’s cyberface available led to many different mods on both the Xbox 360 and PC versions of the game. BAROCKAFELLA had fun with The President in NBA 2K11’s dunk contest (shown above) and I brought him into NBA 2K11’s Blacktop Mode. For those curious, he is still in the game, and still uses the same cyberface file (png1861.iff).

More famously, NBA 2K12 included a bug/glitch where President Obama would show up as a coach in Association and MyPLAYER modes. Shown above is REDitor II’s staff tab of an NBA 2K11 roster file, but you can look at NBA 2K14’s current roster file with RED MC and see the same thing. Barack Obama shows up in the staff tab of all these games, with an SType (Staff Type) of 0, which the game interprets as ‘Head Coach’. For whatever reason, purposeful easter egg or not, NBA 2K12 will use this normally invalid entry for open head coach positions. While that team may enjoy him as a visual figure on the bench, he does not have any skills in the official rosters, dooming the team even more. I hope you enjoyed this dumb fact, but I have to admit that I liked Obama’s inclusion in the recent NBA Jam games much more.