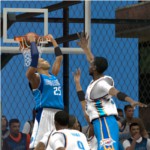 I will admit that I am a bit of a Blacktop Mode fan. Like I have said in previous articles and weekly in the NLSC Podcast, I enjoy simple pickup and play fun when I don’t have the time or interest to dedicate to a full game with NBA teams. Unfortunately my favorite mode is but a shadow of it’s former glory, so what made it so good in the first place? In a word, options. Blacktop Mode in years past had options that let the user customize the game in ways that make the current mode feel like a complete afterthought. Going back all of 3 years, NBA 2K11 had the ability to play 2v2 up to 5v5 in full or half court games and the amazing local multiplayer fun that is 21. NBA 2K10’s Blacktop Mode had a Dunk Contest that wasn’t a Guitar Hero knockoff, actual street dribble moves the players could pull off, and even multiple courts to play on, in addition to the features above. Going back even further to non-PC NBA 2K games, the mode used to let the user decide if the CPU could pick its own team, or if they only wanted to play with current, legend, or celebrity players, or get a randomized pool of players to pick from. There were also weather options, narrow courts that didn’t have space for a baseline 3 pointer, and during the PlayStation 2 generation players might wear pants or long sleeve shirts when playing. I am more than happy that the mode still exists in its current form, players wearing their own team’s uniforms is awesome and having a crowd (on current gen) with a street specific announcer makes the atmosphere of the mode better and more believable. Yet, seeing all these features left behind, it just screams ‘What if?’. What if we got a Blacktop Mode with team specific uniforms and warmup gear, with crowds watching NBA players and Legends playing 2v2 full court NBA Jam style, on a variety of courts, in the rain, with realistic street move animations…it might just be actually worth dropping some VC on to unlock star players.

So there are some Dumb Facts about the history of Blacktop Mode. If I missed your favorite feature from a past iteration of the mode, or if I messed up somewhere, let me know in the comments below. I hope you enjoyed!

Even if I don’t personally share your enthusiasm for Blacktop mode, I can see how it drew you in in the first place and it’s a shame that it’s been watered down as the years have gone by. I’m not sure if it’ll ever recapture those glory days, but hopefully there are enough people interested in Blacktop to get at least some of those features back in the game.