Dynasty & Association Story of the Year 2011: The Next Level 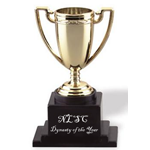 The Dynasty & Association Story of the Year winner for 2011 has been announced! Congratulations to badreligionau who took home this year’s virtual trophy with his Dynasty, The Next Level. The Next Level is an NBA Live 10 Dynasty featuring the Denver Nuggets and is currently in its thirteenth season, making it one of the longest running Dynasty games profiled in the stories section. Congratulations also go out to Thierry., Sit, Axel., The X and Martti., who rounded out the top six.

Thanks to everyone who voted and well done again to the top six, as well as everyone else who was nominated. A special thanks also goes out to Martti. for coordinating the contest again this year. Be sure to check out all the Dynasty and Association story threads here in the NLSC Forum and don’t forget that if you’d like to start your own story thread, you can find some great tips and guidelines in this thread.