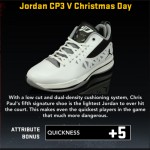 The eighth official roster update for NBA 2K12 is now available and should be downloaded automatically as long as your PC, Xbox 360 or PlayStation 3 is connected to the Internet. Remember to use the Reset Roster function under the Options menu to load the new rosters and be sure to save them afterwards.

The new roster includes updates to the rotations in preparation for the opening night games, flagging injured and suspended players as unusable. However, no new players appear to have been added and a couple of transactions, such as the releases of Eddie House and Nate Robinson, are not included. Samuel Dalembert is now on the Rockets though and Chuck Hayes is back with the Kings following his medical clearance and new contract. Today’s update also includes four new shoes which will debut tonight, namely the LeBron 9, Zoom Kobe VII, KD IV and Jordan CP3 V in their Christmas Day colourways.

how about xmas jersey update?

There’s an unofficial one in the Downloads section for the PC version. The latest roster appears to have unlocked them, but without an official title update for the PC version the textures aren’t showing up. If you’re playing on PC, give the unofficial mod a try though; it’s in the NBA 2K12 Jerseys section of our Downloads database.

how about Terrel Harris and Michael Gladness in HEAT??

I expect they’ll get all the players in eventually. It comes down to when they sign and the terms of their contracts.

How come 2k doesn’t fix the black arms on the rookies on pc?

Apparently that’ll be fixed when the official title update comes out. In the meantime, try JaoSming’s fix.

Will the official title update have real pictures for the rookies? And when do you expect this update to be released?

It wasn’t among the list of issues addressed when it came out for the consoles, so I’d say not. Maybe they’ll be included in future roster updates but there’s been no word on that. 2K Sports have not given a firm indication on when they expect to have the PC patch out but based on last year, it could be as late as the end of January or early February.

Still alot of players missing was hoping to start an association but oh well, the thing i find funny is that 2k said all rookies were in the game just needed unlocking when lockout ended but took then over a week to do this.

They still can’t be unlocked until they sign contracts and even when they do, there’s apparently some other issues involved depending on the nature of the contracts.

Hy! How can i put the roster on the xbox without internet?

Considering that the roster update also makes use of other official updates, it would probably be advisable to find a way to connect your Xbox 360 to the Internet.

i tried to connect it but it says that the xbox cant obtain the router’s/modem’s IP adress :/

Are you trying to connect it via a wireless network? Try connecting via ethernet cable if possible. Failing that, you might want to check Microsoft’s support site or google the issue.