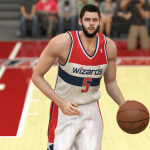 Although Terry Hanson is undoubtedly a Virtual Hardwood Legend and one of my all-time favourite teammates, he isn’t the only player of interest in my NBA 2K14 MyCAREER. Other teams have noteworthy generated players too, such as the one I’m profiling today: the Washington Wizards’ Elden Jennings.

Despite standing only 5’9″, this former Nebraska Cornhusker is a force to be reckoned with. He may not get a ton of minutes behind All-Star point guard John Wall, but he undoubtedly makes the most of his limited court time! As you’ll see, Jennings is absolutely fearless when he gets into the lane, despite his small stature. Given his production Per 36, he may well become the best player under six feet in NBA history – at least on the virtual hardwood – if he ever gets a sustained opportunity for more minutes.

Stay tuned for more NBA 2K14 MyCAREER Stories! As for my story topic in the NLSC Forum, hopefully Elden Jennings will become a recurring character as a worthy opponent, no matter where his career takes him. Shout out to Dee once again for smoothing out and remastering some old clips that were captured at 30 FPS, for use in this feature. For more great basketball gaming videos from Dee and myself, from the weekly NLSC Top 10 Plays to the NBA 2K14 Retro Series, be sure to subscribe to the NLSC YouTube channel!