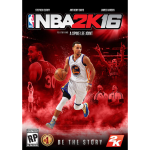 Most of us are obviously excited about the release of NBA 2K17 (myself included), but we do have a couple of new file additions for NBA 2K16 PC today. TGsoGood has released a mod that adds new appearances for your family in MyCAREER, while pinoy21 has released a Golden State Warriors jersey update pack. Check out both releases at the links below!