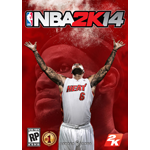 UPDATE: Sony has posted a link for the live-stream.

What do you expect in today’s reveal of the next-gen version? What would you like to see the most out of the next-generation of NBA 2K as we move forward? Give us your opinion in the comment section below, or in this thread in the Forum. You can also discuss all the happenings of Day 0 of E3 2013 in this thread in the Forum. Keep in mind we will be discussing this first look as well as all other news that come out today and your reactions in the first of a series of daily podcasts during E3 recorded tomorrow.