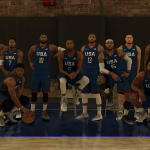 In the wake of officially confirming the 1992 Dream Team as a pre-order bonus, as well as the presence of national teams, the first official screenshot of NBA 2K17 has been released. As you might expect, it features cover player Paul George, albeit in a USA basketball jersey along with the rest of Team USA 2016.

You can check out the full size image below, as well as in the screenshots section of our newly launched NBA 2K17 portal. I expect that more preview media will be on the way very soon, as we’re less than a couple of months away from the release of NBA 2K17. In the meantime, feel free to share your impressions in the comments section below, as well as in this thread in the NLSC Forum. Thanks to PeacemanNOT for the heads up!