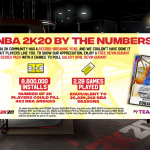 If you log into MyTEAM in NBA 2K20 between now and 6 AM PST on February 28th, you’ll be able to claim a free Kevin Durant Prime Series II Pack. The Galaxy Opal Kevin Durant is the best card you can pull, but there are no guaranteed rewards. Other possible rewards include Pink Diamond Klay Thompson and Russell Westbrook, Diamond LaMarcus Aldridge, Amythest Reggie Jackson, and Ruby Jeff Green.

The pack giveaway is in celebration of a record-breaking year for NBA 2K. As touted by the in-game notification, NBA 2K20 has had 8,800,000 installs and counting; enough to fill 463 NBA arenas. Collectively, we’ve played 2.2 billion games, equivalent to an astonishing 26,829,268 NBA seasons.

As with punching in Locker Codes, it’s worth collecting the free Kevin Durant Prime Series II Pack if you have any interest in MyTEAM. Even if you don’t pull one of the best rewards – I certainly wasn’t so lucky – you can still get a useful card or two, or pad the numbers to increase your Collector Level. Don’t forget that you can join in a discussion of NBA 2K20 MyTEAM here in the NLSC Forum, as well as share your thoughts in the comments section below. I also posted some tips for MyTEAM in last week’s Friday Five, which you can catch up on here.