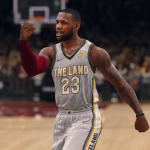 In the wake of the Game Informer article discussing the future of NBA Live, Polygon has posted a more detailed account of Executive Producer Seann Graddy’s comments, as well as Carlos Guerrero’s remarks about the future of the Madden series. Although there isn’t too much in the way of additional details, the article does provide some further context and direct quotes.

Notably, Seann gives credit to what the development team was able to accomplish under Sean O’Brien’s watch, indicating that he feels NBA Live 18 has given the series momentum. In terms of NBA Live 19’s game modes, his direct quote is that they’re all “getting a little bit of love at some level”. As noted in my previous bulletin, hopefully this will mean some overdue enhancements to Franchise and Ultimate Team will accompany further improvements to The One and its connected experiences.

As far as gameplay is concerned, the team will be looking to keep building on the success of NBA Live 18, particularly elements such as the on-ball defense system. Interestingly, Seann described a goal of creating a game for a “younger, new demographic”. While this may be of some concern to older NBA Live gamers, he also indicated the team’s willingness to listen to gamer feedback, and create a game with great pick-up-and-play appeal for people of all ages.

With EA Play 2018 right around the corner, we should start getting more information soon. In the meantime, feel free to share your thoughts on the direction of NBA Live in the comments section below, and join in the discussion here in the NLSC Forum.