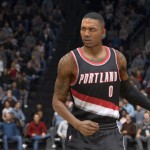 EA Sports has posted some more information on the NBA Live 15 demo for PlayStation 4, as well as the EA Access early trial on Xbox One. The article confirms that the EA Access version will be a six hour trial of the full game, with any progress carrying over to the full version should you decide to purchase it later. The trial will be made available to EA Access subscribers on October 23rd, while all Xbox One users will be able to download it on release day, October 28th.

PlayStation 4 gamers will be receiving a more traditional demo, consisting of a full game of five minute quarters between the Cleveland Cavaliers and Oklahoma City Thunder, with the “Finals Atmosphere” setting. The adidas Learn LIVE Tutorial featuring cover player Damian Lillard will also be included. The PS4 demo will be released on October 28th, the same day the full version drops.

Sean O’Brien spoke about the demo and trial versions of the game, as well as several other topics in our chat with him in Episode #99 of the NLSC Podcast. Be sure to check that out, feel free to add your thoughts on the demo/trial news in the comments below, and join in the discussion here in the NBA Live 15 section of the NLSC Forum.