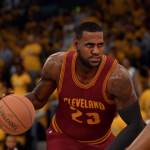 FOX 13 News has posted a piece on Orlando native Seann Graddy, who is now the Executive Producer of the Madden series. More relevant to our community however, the article notes that not all of EA Sports’ titles have been as successful as Madden, and concludes with some notes about NBA Live 17, as Senior Producer Mike Mahar was also interviewed.

Although he didn’t give a specific release date for NBA Live 17, Mike did say that the game would be released “sometime in the calendar year 2017” (for the record, EA has listed it as a Q1 release). He also wasn’t able to go into great detail about NBA Live 17 at this time, but did mention that the focus is on improving gameplay and animations, and adding some new ways to play certain game modes.

Mike was also very candid in discussing criticism of NBA Live in recent years, and noted that the development team is listening to (and indeed seeking out) feedback that they can put to good use. You can watch his chat with FOX 13 News’ Chris Cato here.

A couple of NBA Live developers have also been posting about the game on Twitter recently. While they haven’t been able to go into great detail, it would seem that work is progressing quite nicely on the game, and more news might not be too far away. We’ll certainly post any information that we come across, and look to set up some interviews and whatnot as soon as we’re able.

I honestly think if it was Q1 we would hear more by now.

I hope iam wrong though.

That’s certainly true, a Fall release would still be in the calendar year 2017! Right now we can only go by the financial report. It remains to be seen what they do. I have a feeling that something is coming early next year, maybe a cheaper digital only release followed by a fully-fledged release in September/October. Definitely keeping our ears and eyes open for any news.