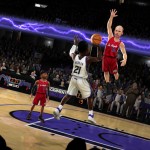 Similar to the presentation recap I did, the gameplay in NBA 2K games largely resembles the year before it with mostly minor updates year after year. Again, I think this will be the same with 2K13. I’m sure a button will change, or there will be a new gameplay mechanic with dribbling or passing, but we will be mostly playing 2K12 with some improvements, rather than a revamped gameplay system. EA’s next game is a bit harder to predict. NBA Live 10 was very different than Live 09, and Elite 11 was very different than Live 10. Elite 11’s marketing campaign preached skill over chance, and unique moments such as a double tip-in dunk. I not only think, but hope, that this stays true in EA’s next game. I also think they will avoid all canimations (two players animated in a defined sequence) and sure, why not, implement the NHL and FIFA collision animation system (think ragdolls but more and less awkward at the same time). I could have put that NHL and FIFA tech in the wishlist part of this article, but what I really want is full on Euphoria animations in a basketball video game. Collisions acting in real time, foot planting, hands animating to reach for the ball…..ugh, I think I will have to keep dreaming and wishlisting this for at least another 5 years or so…time to play some more Backbreaker.

While I cry myself to sleep over the impossibility of a Euphoria based basketball game (Anklebreaker please!) comment on my gameplay predictions and get ready for tomorrow’s topic…online.

Anyways, you’re right that 2K will be virtually the same & you can’t blame them. It’s up to EA to step up & knock them off the mantle.

Yep, unfortunately nothing mind blowing with any predictions on 2K13. They’re likely to play it safe when they need to step up.

It should just be a matter of tweaking for 2K, addressing issues like player speed, further refining responsiveness and player fluidity (both better in 2K12 but there’s still room for improvement), minor control changes and customisation options, things like that. They have a solid base to work on as far as realism and AI, it plays a pretty good game of basketball already and they can build on that without an overhaul.

EA’s game has to sort out its tech in terms of physics and animations, but it also has to make a few strides in AI, strategy and realism at the same time. Catching up to 2K isn’t feasible within one year but if they take some of the best aspects of the recent titles, avoid some of the pitfalls and make a few enhancements, it has a chance to be solid.