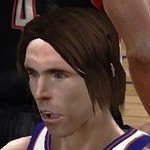 Do you remember NBA 2K8’s graphics? Stylized, random shading on the uniforms, faces that got horribly beaten with the ugly stick. It was very similar to the graphics we had on the Xbox 360 for NBA 2K6 and 2K7. Then 2K unveiled a new graphics engine for NBA 2K9 and has been slowly improving on it each year. Guess what, I think it will be more of the same. Even though the consoles have special lighting and dynamic self shadowing that the PC missed out on, I think the biggest thing 2K13 will implement is simply a more desaturated look. 2K has had a major issue using actual team colors for uniforms, resulting in pink uniforms and courts for the Pistons, Clippers, and Bulls year after year. For 2K13, I think they will try and apply a desaturated filter to better replicate what we see on TV rather than the vibrant 2K games we are used to. NBA Live 10’s graphics were pretty good with vibrant colors, but they were tweakable with in-game sliders. Elite 11 took the graphics in a different direction, with very dark colors on players with a kinda creepy, or washed out look. This is probably my riskiest prediction yet, but I think EA’s next NBA game will look amazing, and it is all because of Madden and NCAA Football. Both of those football games look fantastic, and if you remember, EA’s next basketball game is being created under the same roof. I’m thinking we will see some nice HDR effects, with great minute details, and hopefully better cyberface quality than what we saw in Elite 11. All I want graphic-wise, from either game, is Game Face. The ability to take a picture of yourself, with PS3’s Move, Xbox’s Kinect, or online through community sites, and apply it to a player in the game. It would make console modding easier with classic players and get people more invested in their players if they create themselves. The technology works great for other EA sports games, so hopefully they will use it in their upcoming game.

In the end, I just want both games to look like games created in 2012, not something PC patchers could do with NBA 2K9. Comment agreeing, or disagreeing with my predictions, or create an opinion article yourself through The Soapbox.

Hopefully, I mean NCAA/Madden look freakin amazing, hopefully that can transfer over to the hardwood.

In my opinion. 2K has been taking steps backwards in graphics since 2K9. NBA 2K9 was beautiful! But ever year after than, something would depreciate. Kevin Garnett was perfect, then in 2K10 it looked less like him, and even less in 2K11. The same applied for Ray Allen. And they train wreck that is Chris Paul in this year’s version is flat out despicable. With 2K holding the crown in basketball sims, they should not be allowing patchers on this wonderful board to outdo them. At the very least, they should implement some sort of initiative to allow patchers to upload their work to be voted on to be used in NBA 2K throughout each season. We understand player get new tats, hairstyle, lose or gain weight, etc. 2K should be more in tune with these changes as buying and supporting fans, we notice them all.

Well that is why they initiated the whole Dynamic Art updates thing. The game can actually get updated player files when a player changes hair styles or a new tattoo. It has already been in action adding new shoes and updating the Raptors and Pistons courts. Problem is that 2K has yet to do any actual player updates but I hope they will stick to adding new players rather than update existing ones right now.

Solid predictions Jon. For my money, I think both games will end up looking pretty good, perhaps not perfect but certainly far more than adequate and not “cartoonish”, as a lot of people like to say in their critiques.

I’m not a huge graphics guy but would be good if EA could make a jump and provide a wow, because frankly they need to make a splash. Safe won’t cut it.

It’ll be interesting if they sacrifice fps for graphics like they did in Live 07. I don’t think it will sit well with us…again.

They better not. That’s one thing I can’t handle. Framerate is one of my pet peeves in sports gaming. Game has to run smooth first & foremost. I won’t touch it with a barge pole if they don’t get smooth FPS.