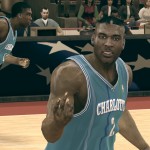 The NBA 2K series has embraced the discussions of greatest NBA teams of all time with NBA 2K11 and 2K12. The memories of special decade teams are almost completely gone and instead we are looking for classic lineups that actually existed. I think the obvious prediction is that 2K will continue with Jordan as a centerpiece to the game, and while the modes that focus on the current NBA will be improved, look for more classic teams and more legendary players to be included. I don’t think Barkley and Reggie will make the cut, but I do think they will expand into the early 2000s with more than a preorder team. Also, I think they should focus on NBA Finals teams, rather than a seemingly random pair of teams from a given year. While NBA 2K has the classic teams taken care of, and EA has never had legends in their Xbox 360 or PS3 simulation games, I think EA will work to expand and integrate their FIBA license into the game more. Despite its inclusion in each game since NBA Live 08, the lack of roster updates and inability for users to edit those rosters has really hurt the FIBA teams. The FIBA specific rule sets and trapezoid lanes were fun diversions, but it got old quick. I think that with the Olympics happening this summer, EA will take advantage and get those FIBA teams updated. On top of that, I think the FIBA teams should be integrated into Dynasty and Be a Pro modes as well as online tournaments specific to this mode. The ability to let users add created players or NBA players to these rosters would be a great bonus as well. If EA really wanted to make an impact on NBA 2K’s stranglehold on the basketball video game market, they should use their exclusive NCAA rights and combine their last two simulation games onto one disc. A joint NBA and NCAA game would be HUGE since the game would see spiked sales during both March Madness and the NBA Finals. On top of that, Dynasty and Be a Pro modes would be improved through draft classes and college careers. It is certainly possible, and would require sacrifices in the presentation and other disc space eating features, but I think the payoff would be well worth it.

Yeah, I realize I’ve been barking up the NCAA/NBA combined game tree for years now, but I would still love to see it. Tomorrow I will give my final predictions on each game as I look at X Factors. Comment below if you want to see a combined game!

A combined NBA/NCAA game would be fantastic, but it’s never going to happen until they can secure the international license rights for NCAA, which has prevented them from releasing the college games internationally for decades now. With the worldwide popularity of the NBA, I doubt they’d settle for a North American release only for the NBA sim and that’s what the presence of the NCAA would result in. Unless of course, they replace those teams with fictional ones in an international version, but then that kind of defeats the purpose. Still, it’d be awesome if they can pull it off.

I’d like to see legends in the EA game again, even if they’re implemented the old fashioned way. A PC release would also mean we could add missing legends anyway, just as we did in the last few PC releases of NBA Live after the agreements with certain players expired over the years. If they can’t really do anything with the legends then I agree that making full use of that FIBA license and perhaps doing something with Euroleague as well is the way to go.