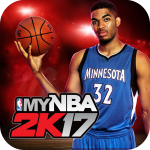 It’s been revealed that Team 2K member and 2016 Rookie of the Year Karl-Anthony Towns will be the “cover” player for the MyNBA2K17 companion app for NBA 2K17. The app will be available for Android and iOS devices on September 8th 2016, at no cost. In addition to mini-games that allow users to earn Virtual Currency daily, MyNBA2K17 will also feature access to the Auction House, the MyPLAYER store, and 2KTV.

The app is also how we’ll be able to scan our faces into the PlayStation 4 and Xbox One versions of NBA 2K17. This feature was previously hinted at during the Season 2 finale of 2KTV, and the approach worked very well in NBA Live 16 last year. Unfortunately, Operation Sports has been able to confirm that MyNBA2K17 will not support face scanning for the PC version of NBA 2K17, which is a definitely a missed opportunity.

In other NBA 2K17 news, SLAM Magazine has posted their own hands-on preview of the game. There isn’t too much in the way of new information, but it does mention that Stephen Curry will indeed be very tough to guard in this year’s title. Popular Science has also posted a preview that mentions a little more about enhancements to physics, and the removal of clipping through limbs.

Do you have any thoughts on the latest news? Feel free to have your say in the comments section below, as well as in our NBA 2K17 Forum.

The link to the Popular Science preview doesn’t work. Here is the correct one http://www.popsci.com/nba-2k17-improves-on-merging-sports-and-gaming#page-3

Strange, the link I posted is definitely working for me. Thanks for posting that one though, good to know in case anyone else is having problems with the one I used.