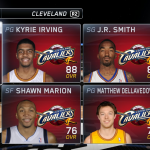 The latest Synergy update for NBA Live 15 has activated all players for Tip Off mode. All 30 teams now feature their best possible lineup, meaning that complete, uninjured rosters are now available for exhibition play as well as Dynasty Mode.

At this point, it remains to be seen whether or not any further ratings or accessory adjustments will be pushed through, given that the 2015 season has come to an end. It’s possible that further end-of-season tweaks may be made, and that the 2015 NBA Draft has postponed one final update for NBA Live 15. For what it’s worth, there was no specific mention of the June 18th roster for NBA Live 15 being the final update for the game in its release notes.

It also remains to be seen whether or not NBA Live 15 will receive an offseason roster update. Last year, NBA Live 14 received an additional roster update following the conclusion of the 2014 season and before the 2015 season commenced, adding offseason movement such as LeBron James’ return to Cleveland. However, the update did not add any of the Class of 2014 rookies, nor did it update player data such as jersey numbers. If NBA Live 15 does receive a bonus roster update reflecting offseason player movement, I imagine it would be a similar situation.

The practice of restricting the Tip Off rosters to the most current active lineups based on Synergy data that was employed in NBA Live 14 and NBA Live 15 was certainly a controversial one. While it was done in the name of realism and keeping the game fresh and up to date, it wasn’t always desirable, especially with the lack of custom rosters in both games. With custom rosters returning in NBA Live 16, hopefully it will no longer be an issue.

As always, feel free to add your thoughts in the comments section below, as well as in this thread in our NBA Live 15 Forum!