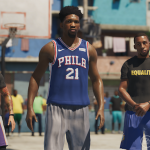 GameStop’s pre-order listing for NBA Live 19 has revealed some new details about the game. There will be a new commentary team of Ed Cohen and Jay Williams, with new dialogue being added throughout the season. The story in The One will apparently begin in high school, and Big Moments return as part of The League.

There will also be a handful of in-game pre-order bonuses, based around cover player Joel Embiid. These include signature shoes, a jersey, a custom court, and more. See below for all the info that’s been revealed by GameStop’s store listing.

Speaking of Joel Embiid, a cover reveal trailer has also been released. ThaLiveKing posted several high resolution screenshots from the trailer in our Forum. You can watch the trailer below, as well as check out all of the screenshots.

Finally, Gaming Trend recently spoke with NBA Live 19 Creative Director Connor Dougan. Connor discussed some of the key improvements and new features in this year’s game, from Real Player Motion technology and dynamic AI to clothing and the player progression system in The One.

As always, feel free to add your thoughts in the comments below, as well as join in the discussion in the NBA Live 19 section of the NLSC Forum! 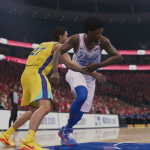 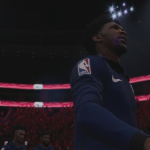 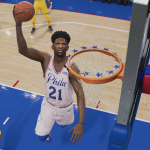 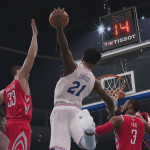 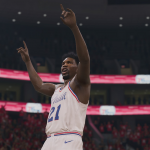 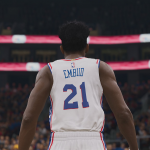 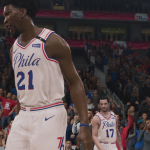 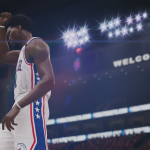 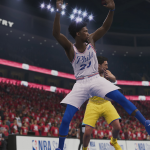 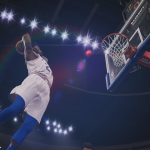 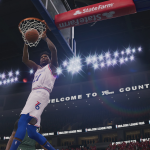 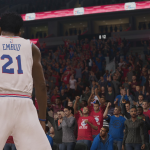 NBA LIVE 19 redefines the way you play a basketball game. Real Player Motion and 1v1 Everywhere gives you control in every possession, providing you the ability to change momentum in any game and dominate your opponent. Pursue basketball glory with the freedom to create your path in The League and The Streets, in the return of THE ONE. No longer a solo affair, build your squad of superstars, legends, and cultural icons to join your quest for greatness on courts across the globe.

Continue your journey to be THE ONE in NBA LIVE 19 and progress through an all-new narrative guided by expanded tools and strategies when building your player with more courts to dominate across the globe. Build your squad and defend your court within an expanded, quest-driven journey for you and your recruited teammates to explore and progress. Compete on courts around the world against new players and legends who join your squad after you’ve beaten them. Level up and unlock new hero abilities for you and your teammates for more playstyle customization and game-changing skills. Customize your player with even more options for self-expression.

I’ve wanted to see Big Moments separately. I’m not excited to replay moments with my generic character. Leaned towards the ESPN cast team too. ;(

P.S. It’s right you put the GameStop info, cause their site is blocked for me (they do it for those who’s too far from the USA and won’t be their clients ever :$).

I’d prefer Big Moments as they used to be, too.

GameStop’s site can definitely be fiddly for international visitors (myself included), so I’ll always copy and paste that inf (or post a screenshot) for those who have trouble accessing the original source.