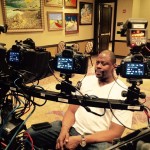 Although we’re at least a few months away from getting in-depth information on NBA Live 16, it appears as though we’ve received our first tidbit about this year’s game. Over the weekend, a photo of Patrick Ewing getting his face scanned was posted on the official NBA Live Twitter, along with the hashtag #NBALIVE16. As such, it would seem to confirm that at least a few former NBA players will be getting their faces scanned for this year’s release.

Of course, it remains to be seen the capacity in which Legends will be used in NBA Live 16. In NBA Live 14 and NBA Live 15, Legends have only been playable in Ultimate Team, and it seems a safe bet that they’ll be collectable in NBA Live 16’s Ultimate Team as well. However, expanding the presence of Legends beyond Ultimate Team – such the inclusion of the old Decade All-Star teams, or historic squads – has become a Wishlist item. As it stands, we likely won’t be getting any details on that for a little while yet.

What are your thoughts on Legends getting their faces scanned? Do you think we’ll see a bigger presence for Legends in NBA Live 16? Sound off in the comments below, and join in the discussion in this thread!