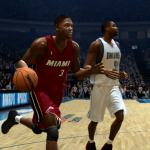 My first releases for this year’s March Modness are a little different. As I mentioned in Episode #363 of the NLSC Podcast, revisiting the Xbox 360 version of NBA Live 06 to check a couple of details resulted in an extended session with the game, and the inclination to mess around with its rosters.

To that end, I’ve whipped up a couple of quick projects, both of which I’m sharing today. The first is an End of Season roster, which includes final 2006 season lineups. I’ve also added a few missing players that ended up having prominent roles, such as Smush Parker. It’s not as detailed of an update as I’d make for PC, but it’s something I put together for my own use, and have decided to share it.

The second roster adds makeshift 1998 Bulls and 1998 Lakers to the game. Again, it’s nowhere near as comprehensive as a roster I’d make for PC, but you get the idea. It’s something else I made just for fun, and am sharing in case anyone else wants to try it out. Download the End of Season rosters here, and the ’98 teams rosters here. I’ve also created a post for them in my NBA Live 06 release topic.

Please note that rosters for the Xbox 360 version of NBA Live 06 need to be rehashed and resigned before they’ll work on another console. I’ve found a video which explains the process, which I’ve posted below along with some basic installation instructions. Other than that, I’m providing these saves as-is, with no guarantees. I hope a few people will feel inclined to try them out! I’m also still working on some projects for PC games, so stay tuned.

Before you can use the roster save on your Xbox 360, you will need to rehash and resign it so that it’s tied to your profile and console. More information on the process can be found here:

NOTE: The roster will overwrite any save with the same name (ROSTERS 13 for the ’98 teams, ROSTERS 14 for the End of Season roster). If you have rosters with those names, back them up first or risk losing them. I take no responsibility for any lost data!

After the roster file has been prepared, it’s ready to copy to your console.