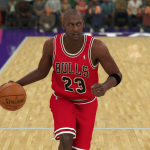 The Last Dance has captivated basketball fans for the past couple of months, and now, it’s drawn a familiar figure in the basketball gaming community out of retirement. For the first time in eight years, legendary NBA 2K video creator MessenjahMatt has uploaded a new creation, inspired by the ten-part documentary on Michael Jordan and the Chicago Bulls!

Using a combination of clips from his previous NBA 2K11 videos and new footage taken from NBA 2K20, MessenjahMatt has re-created the trailer to The Last Dance, as well as the final moments of Game 6 of the 1998 NBA Finals. As with his previous works, the video is simply a masterpiece. I strongly recommend that you watch it below, or catch it here on his YouTube channel!

I previously profiled MessenjahMatt in a Wayback Wednesday article, noting that many of his techniques are still a mystery. To that end, I would highly recommend checking out the rest of his videos, which feature amazing re-creations of some of Michael Jordan’s best moments, and most famous commercials. He notes that The Last Dance may be his last video, and if it is, it’s a fantastic note to finish on, and a fitting tribute to an incredible documentary.