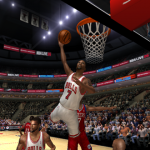 If you’ve browsed the NLSC Forum, chances are you’ve noticed our Basketball Video Game Stories section. It’s a place where you can entertain your fellow basketball gamers with ongoing coverage of your exploits in NBA Live and NBA 2K, whether you’re playing through the franchise or single player career modes. Over the years, we’ve had some very creative and popular story threads, many of which are now enshrined in our two Story Hall of Fame subsections, so that we can easily go back and enjoy them all over again.

However, story threads have somewhat fallen out of fashion. While we still have gamers posting in the Basketball Video Game Stories section – and we certainly encourage everyone to make use of it, if they feel so inclined – it sadly seems that we’re past the heyday of the story thread. There are a few reasons for this, which I thought I’d explore in today’s Monday Tip-Off, in addition to shining a spotlight on the section and the practice of maintaining story threads in general.

So, what are story threads all about, what was so enthralling about them, and why are they kind of becoming a thing of the past?

As I mentioned above, story threads are basically a chronicle of one’s experiences with a basketball video game; in our community, generally NBA Live or NBA 2K. Originally they were focused on the franchise modes, but with the rise of MyCAREER, we’ve seen a lot of stories centred around single player careers as well. The best story threads go well beyond simply recapping results and offering up anecdotes, however. They also include screenshots, detailed statistics and standings, news and feature articles, and thanks to YouTube, video highlights. In-depth coverage and great presentation have made the best story threads really stand out. Some threads have taken an even more creative approach, providing fully-fledged narratives…in some ways, the basketball gaming equivalent of fan fiction. Forum member cocobee once adopted a very unique approach, taking the old saying of “a picture’s worth a thousand words” to heart as he told his story mostly through screenshots. Other stories have featured NLSC Forum members as players. Not unlike modding, maintaining story threads about the basketball games we’re playing has been a fun creative outlet. I think in some ways, it’s also brought us closer as a community, allowing us to share in each other’s experiences.

That’s because story threads were not only fun to maintain, but also to follow. The best storytellers could captivate their fellow basketball gamers with tales of their ongoing exploits on the virtual hardwood, and the different approaches to playing through franchise and career modes demonstrated all the twists and turns they could take. There was also a give and take of ideas, with readers drawing inspiration from the thread creators, and the thread creators often seeking advice and taking suggestions from their readers. Maintaining a story thread often made basketball gaming more exciting, and in turn, got others amped up to play as well.

While all the great things we’ve done with modding has obviously had a bigger impact on our gaming experiences over the years, story threads still rank up there as some of the best work we’ve done as a community. They demonstrate how passionate we are about basketball video games, how much enjoyment we get out of them, and why we care so much about them. A binge of the Stories section will quickly make that very clear. When you get the chance, I highly recommend checking out the threads by Kenny, The X, Clutch, Sit, Martti, and our other long-time contributors. And yes, I’ve got a couple of stories in there, too.

Alright, so story threads were a lot of fun, but they aren’t as popular as they used to be. What happened? This is something that we’ve discussed in previous episodes of the NLSC Podcast, and my theory remains unchanged. I believe it’s simply a matter of changing times, changing demographics, and a changing medium. People come and go in online communities, and even if they’re still around, they might not have the time or inclination to maintain a story thread anymore. Video has also become a more viable and popular medium for creators and consumers of gaming content alike. Let’s Plays, vlogs, and video recap series are in vogue, and thus far more common.

So, to make a corny play on the title of an old song, has video killed the story thread? Not entirely, and it needn’t do so. You can embed videos from several services in our Forum (including YouTube), so it’s quite feasible to have both styles of coverage for our basketball gaming exploits. Of course, most YouTubers understandably prefer to build their brand on their own channel, without the added responsibility of incorporating their content into a story thread elsewhere. For gamers who prefer to write about their experiences, the subsequent shift in preferred medium and declining activity in the story thread sub-community can also be a little discouraging.

Of course, it is possible that the era of the old school way of sharing basketball gaming experiences is drawing to a close. That’s just the way it goes, sometimes. The popularity of certain activities will rise and fall, while others – such as modding, in our community – remain evergreen. On the other hand, it could just be a sign that the practice needs to get with the times, an indication that a new era is ready to be ushered in. Moving forward, if the storytelling sub-community is to thrive, I believe it needs to be a hybrid of the old and the new: screenshots, written recaps, and statistics that the audience can refer to, as well as video highlights, summaries, and commentary.

That’s not to say that the traditional style should be abandoned completely. At the end of the day, if you feel inclined to share your experiences with your fellow gamers, you should do so in the way that’s most comfortable (and convenient) for you. But for our Stories section to receive a shot in the arm, to be as bustling as it once was, I think we need to welcome new styles of story threads, and in particular, greater use of video.

Perhaps most of all, we need to be driven by our passion for basketball games, and our enjoyment of them. Story threads are maintained because of what they add to the immersive nature of franchise and career modes; the desire to enjoy the games, and see other people enjoying them, too. Again, I encourage everyone to look back at the great story threads in our NBA Live and NBA 2K Hall of Fame sections. On top of that, if you’re really into a franchise or career game, I encourage you to tell us all about it. Share your experiences with enthusiasm, and you might just find you have a rapt audience.