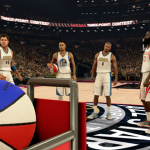 As I briefly described here in the Forum, I had a rather unfortunate experience in my NBA 2K17 MyCAREER game last week. The All-Star Weekend didn’t exactly finish with a bang, thanks to a rather nasty glitch that I feared might have messed up my MyCAREER save in more ways than I originally anticipated. Combined with some disappointment in the Slam Dunk Contest, it’s fair to say that the All-Star Weekend didn’t turn out to be one of the highlights of my NBA 2K17 MyCAREER thus far. As such, I thought that I’d talk a little bit more about it in this week’s Monday Tip-Off.

Spoiler alert: I will be talking about a development in the story that happens a considerable way into MyCAREER. It’s not exactly a plot point on the level of Tyler Durden, Dr. Malcolm Crowe, or even Luke Skywalker’s parentage – though I guess those twists are actually all common knowledge now, anyway – but out of respect to those who’d like to let the story reveal itself, I figure it’s only appropriate to offer a heads up. It’s also something else that kind of bugged me, so I definitely wanted to touch upon it. With that said, here’s how the 2017 All-Star Weekend went down for me in MyCAREER.

I was looking forward to playing through the All-Star Weekend, as it’s the first time I’ve been selected to participate in all of the events in a MyCAREER game. The Weekend began of course with All-Star Friday, and the Rising Stars Challenge. I managed to turn in a good performance, registering a triple double that included a 20-20 performance in points and assists, and took home Player of the Game honours as a result. Unfortunately, it seems that doesn’t include a Rising Stars Most Valuable Player award for my trophy shelf, but so be it. It was a good start to the Weekend. The Three-Point Shootout also turned out quite well for me. I was a bit thrown off by the timing on the Shot Meter during the contest, as it seemed to fill a lot quicker than it does during regular gameplay. I managed a decent score, and qualified for the final round along with Stephen Curry and Justice Young. Young is actually leading the league in three-point percentage in MyCAREER, but he absolutely stunk in the championship round. Shooting second, I posted a score of 17, which turned out to be good enough to win after Curry choked during the early racks. Again, no trophy for the shelf, but it felt good to be the three-point champ.

That’s when the All-Star Weekend started to take a downward turn. Unfortunately, I’d have to say that I was pretty disappointed by my first experience with the current approach to the Slam Dunk Contest in NBA 2K. The concept of picking a dunk and then timing a few button presses isn’t a bad one, but it’s taking a lot of control out of our hands. The timing felt off, and I turned in a dismal performance as a result, which wasn’t helped by the lack of replacement dunks. A successful windmill netted me a score of 17, which seemed ridiculous. Honestly, NBA Live did the dunk contest so much better, all those years ago. I’d like to see it get better in NBA 2K18.

The most frustrating moment of the whole Weekend was the nasty glitch I encountered with the All-Star Game itself. While I’d definitely been selected as a participant, when I went to the game on the schedule, I found myself stuck at a weird camera angle after the introductions had concluded, with the MyPLAYER HUD only partially loaded. I couldn’t seem to correct the problem, even after saving, exiting and re-loading the game. It was then I looked at the roster for the West All-Stars, and saw that I wasn’t on it! My only choice was to sim to the end of the game, which then resulted in MyCAREER immediately loading into the next game on the schedule.

After that game concluded, I double-checked the All-Star Participants menu, and confirmed that somehow, I’d been dropped from the Western All-Stars. I also found that the schedule had glitched: the game against the Sacramento Kings that I’d just finished was marked as a win, but was still selectable. Selecting it actually took me to my next game against the Brooklyn Nets, and a similar glitch was present after I finished that game. Fortunately, selecting the next optional practice session simmed past the actually completed Nets game, and everything now appears to be back to normal. Still, it’s frustrating and disappointing. I have a feeling that the glitch might be tied to a development in the story. As the season progresses, a cutscene triggers in which your player will approach Xavier Cross, the team trainer, and is ultimately diagnosed with an injured hamstring. You’re given the choice to try and play through the injury, or sit it out; if you decide to play, you’ll be flagged as injured, your ratings take a temporary hit while you’re recovering, and you’ll limp a bit at times during the games that follow. It’s apparently supposed to trigger a bit later in the season, but for me, the cutscene and decision came in between the Three-Point Shootout and Slam Dunk Contest.

My theory is that the timing of the cutscene caused the glitch. Whether it was just a random error or the game is erroneously treating the situation as though I decided to sit out and named an injury replacement without any notification, I couldn’t possibly say. Given that Kenny and Arcane both encountered the cutscene at a later time, I can’t help but think it was somehow responsible. As for the plot development itself, I’m not a fan. It’s out of context to everything else that was happening in MyCAREER up until that point, making it another canned moment in a mode that should feel dynamic. Let the gameplay shape plot points like that, not the other way around.

So yeah, it ended up being a rather disappointing All-Star Weekend, in part due to the clunky Slam Dunk Contest (which we can’t practice beforehand), but mostly due to the glitch that I thought might have messed up MyCAREER. Glitches and bugs are an unfortunate part of video games, and I appreciate the fact they’re not always easy to stamp out. However, it does bug me (no pun intended), especially as 2K made a point of slipping a dig at the infamous Bynum glitch in NBA Elite 11 by way of one of the MyPARK squad introductions. They should really focus on fixing bugs like this, and longstanding legacy issues, rather than making fun of EA Sports’ shortcomings.

That’s a whole other topic for another time, of course. At the end of the day, it’s a shame my All-Star Weekend experience in MyCAREER left me feeling disappointed and wanting more. I am really enjoying NBA 2K17 otherwise, and still feel that it has some very pleasing improvements over NBA 2K16. However, I did feel like having a bit of a grumble when I encountered this problem, and experienced the plot point that may have caused it. Looking ahead to NBA 2K18, I hope that more bugs can be caught – or quickly fixed in title updates – and that predetermined moments are absent or kept to a minimum in MyCAREER…especially if the latter leads to the former.

I agree that is a bit boring, and it’s really been the same since 2K13 when they fully implemented it. Luckily I’m pretty bad at these games so I don’t have to go through this.

Simming is always an option, but I’ve traditionally been a fan of the All-Star Weekend and enjoy playing through it, so it was a shame it didn’t turn out as well as I’d hoped. An unfortunate bug, at the end of the day.