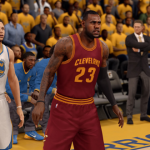 We’re at midcourt, and the ball is about to go up…it’s Monday Tip-Off! Start your week here at the NLSC with a feature that’s dedicated to opinions, commentary, and other fun stuff related to NBA Live, NBA 2K, and other basketball video games. This week, I’m tipping things off with some more thoughts on how we can give better feedback as a gaming community.

If you haven’t yet checked out the interview that our friends over at Operation Sports conducted with the NBA 2K team, I highly recommend giving it a look. I obviously got a kick out of seeing JaoSming and Leftos taking part, and hearing the NLSC receive some flattering mentions, but those were far from the only parts that I enjoyed. All the guys participating in the interview provided an interesting insight into how they came to join the team at 2K, what it’s like to work in the industry, and how their perception of video game development changed from when they were members of the community. It’s a four part series, and you can begin with Part 1 here.

The interview also discusses the importance of community feedback, noting that even when the developers aren’t replying to comments, they are reading them. There were some good tips on how to get noticed, whether you’re seeking employment at Visual Concepts, or simply want to provide the developers with feedback for official patches and future games. Some of their comments got me thinking once again about the way we give feedback – not only to 2K, but also EA – and how we can do a better job in that regard. Personally, it’s also made me reflect a little on the way that I’ve critiqued the game and offered up feedback in recent years.

In a nutshell, the common theme of the developer’s advice regarding feedback was very similar to what I’ve said previously. Presentation and content are vital: don’t post in all caps, stay on topic, cut out the insults and profanity, and elaborate on your ideas instead of simply saying “make the game better”. Even though there are some people who need a reminder about that every so often, there are many passionate basketball gamers who can evaluate both NBA 2K and NBA Live in a fair and intelligent manner. They can also put forward well-thought out ideas and specific suggestions as to how the games can improve. Scott O’Gallagher and Da_Czar both talked about the importance of members of the basketball gaming community being able to consistently create quality content based around improving the experience for their fellow gamers, and providing constructive feedback for the developers. I have to admit that it got me thinking about the content that I create in that regard. I’d like to think that I mostly do a good job about putting forward my ideas, as well as compiling Wishlists on behalf of the community. However, it’s set me to thinking about how I can do a better job with my feedback for both NBA 2K and NBA Live, moving forward.

In particular, the remarks about in-depth ideas that could be taken to the engineers to be implemented really resonated with me. It’s made me think that over the years, I’ve perhaps become too vague in my feedback, and unwilling to discuss logistics. In all fairness, I do write a lot of articles and have been taking part in these conversations for a long time, so there’s probably some combination of fatigue, burnout, and maybe even a little cynicism afoot. I’d rather not make excuses, though. I’m still passionate about basketball video games, I want to see them improve, and while it may sound egotistical, I’d like to lead by example in the content that I create for them.

It’s also made me think about a small Twitter rant I went on recently, after my frustration with both gameplay and connection issues in 2K Pro-Am boiled over. While I’ve seen other gamers post more hostile rants regarding basketball video games in the past, it was less measured and more acidic than I’d like to be when discussing these issues. While I’ll always advocate speaking your mind and letting off steam when you need to, I also believe in channelling disappointment and dissatisfaction into constructive feedback. On that particular occasion, I didn’t do a particularly good job of practising what I preach.

So, what is it that I’m planning on doing, and suggesting that we try to do as a community? Well, once we get our grumbling out of the way, we need to start putting our good ideas out there. As frustrated as we may be with the games or certain PR controversies, we shouldn’t let it stand in the way of talking about our ideas for improvements, especially all the specific changes and additions we’d like to see. As much as we may need the catharsis of venting, lengthy rants that don’t describe the issues that are bothering us (or solutions we want to see) shouldn’t make up a majority of our feedback. Not if we want it to have any kind of positive impact, at any rate. Unfortunately, it’s all too easy to feel jaded and cynical when we’re bothered by familiar legacy issues. It’s fair to say that it ultimately discourages us from offering up any kind of lengthy constructive feedback, because we figure no one is listening, and in many cases, we’ve said it all before. As I alluded to earlier, I believe I have suffered burnout on those discussions at times, and it’s affected my willingness to share detailed ideas. Hearing the guys at 2K talk about the kind of feedback they’re looking for and the fact that they’re always reading posts, even if they aren’t commenting, has rekindled my enthusiasm to have in-depth discussions about improvements and fixes.

To throw a few examples out there: if you have ideas about how player development could be improved in MyLEAGUE and MyGM, don’t hesitate to go in-depth when you share them. If you feel there’s a way that controls could be more intuitive, describe that method in detail. If you have an innovative idea for MyCAREER, explain how you’d like to see it implemented. If you believe that something should be done in a particular way, tell the community (and devs) all about it. There’s no guarantee that everything you want will make it into the game – at least not straight away – but suggestions can’t have any impact if they remain unspoken.

Both EA Sports and Visual Concepts have their own roadmaps, and they’re not going to drastically change direction just because of one person’s suggestions. However, that doesn’t mean that certain ideas can’t be incorporated into their vision, or that detailed feedback isn’t worthwhile. Again, it’s easy to get jaded and forget about the benefits of being enthusiastic about sharing constructive feedback and innovative ideas. For my part, it’s something that I’ll be keeping in mind, whether I’m writing an article, creating a video, talking about an idea on the NLSC Podcast, or simply sharing and discussing ideas with my fellow NBA Live and NBA 2K gamers in the NLSC Forum.

With that being said, let’s get to typing, talking, and creating videos that illustrate our ideas for making NBA Live and NBA 2K better. Whether it’s laundry lists of specific fixes and additions, or outlines for innovative concepts that would enhance the basketball gaming experience, we need to speak up, and express exactly what it is that we want. It isn’t guaranteed that we’ll always get the results we’re after, but if we don’t share those great ideas that we have, we can certainly guarantee that they won’t have any kind of impact. We’re a passionate, knowledgeable community; let’s channel the same passion and creativity we have for modding into the feedback we post.