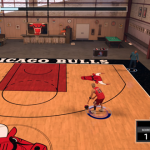 My NBA 2K17 MyPLAYER is currently sitting at 92 Overall, which means I’m getting close to hitting all the level caps and maxing out my ratings (at least without levelling up MyPARK rep, anyway). This also means that it takes several sessions of Doin’ Work to unlock the next upgrade. With only one Playmaker Badge left to unlock and upgrade through the MyPLAYER Store, and new ratings upgrades only becoming available every other in-game week or so, I’m currently earning more VC than I can spend on improving my abilities.

As such, I can spare more VC to spend on frivolities such as MyPLAYER clothing, and decorating MyCOURT. Having purchased a few of my favourite jerseys and outfitted MyPLAYER with Michael Jordan’s shoes and uniform, I decided that MyCOURT could use some rebranding. I definitely like the changes I’ve made and I’m enjoying MyCAREER a lot, though I have to admit that I’ve been thinking about my future. Normally, I’d prefer to stay put with the team that drafted me, but as of late, I can’t help thinking that I should keep my options open.

Before we get to that, let’s take a look at MyCOURT. For those of you who don’t know, my favourite team is the Chicago Bulls. Since I had the VC to spend, I went to the Store and loaded up my cart with all of the Bulls branding: court design, backboard, back wall mural, scoreboard, even the basketballs. Take a look around MyCOURT, and it’s certainly not a mystery as to which NBA team is my favourite. On top of that, my shoe collection includes a few Air Jordans, and various awards are beginning to adorn my walls, along with a couple of signed jerseys from Jackson Ellis and Chris Paul. Even though it’s nothing more than a cosmetic change, I have to admit that it’s kind of fun to personalise MyCOURT, and certainly cool to see the plaques and framed jerseys on display. There is a slight problem with the branding I’ve chosen, of course. While the Chicago Bulls are my favourite team in real life, in MyCAREER, I’m actually playing for the Denver Nuggets. This leads to amusing scenarios where my Nuggets teammates come to MyCOURT to shoot around, only to find me wearing a Jordan jersey and Bulls shorts, with a big mural of Jimmy Butler and Bobby Portis, and Bulls logos everywhere. Uh…go Nuggets?

There aren’t any consequences for doing this, of course. I’m also still going out there every game and giving it my all, racking up some big numbers in the midst of a 31-game winning streak. I’ll admit that I am aiming for some personal glory, as I’m currently the frontrunner for the Most Valuable Player, Defensive Player of the Year, and Rookie of the Year awards. However, winning the championship would be a fantastic way to cap off what has been a very fun rookie season in NBA 2K17’s MyCAREER. Beyond that, though? Well, like I said, I’m starting to think about the future, and other options.

Once again, I’ve never really thought about asking for a trade in my previous MyCAREER games, and up until now, it’s been the same in NBA 2K17. I’ve relished the idea of playing at least a few seasons of the mode, spending all of them with the same team. Since I’m well ahead of the real NBA season and should be able to play at least a couple of years in MyCAREER without simulating any games, I’m thinking about changing things up and experimenting with a new approach. To be honest, my new MyCOURT decorations have a lot to do with that. By now, I’m sure you’ve all figured out what I’m getting at. I’m thinking that it would be fun to play for the Chicago Bulls at some point. The fact of the matter is that I’ve never actually played for my favourite team in MyCAREER before. This is the closest I’ve come to having that happen, since the Nuggets drafted me with the fifteenth pick, just one spot after the Bulls took Denzel Valentine. It’s obviously not just about the branding of MyCOURT matching the team I’m playing for; the prospect of being able to bring a virtual championship to Chicago is certainly very appealing.

Of course, this isn’t something that’s going to happen right away. I have unfinished business with the Nuggets, and I am really enjoying playing with the team. It’s also brought back fond memories of my NBA 2K13 MyCAREER that I enjoyed so much, and in Kenneth Faried, Wilson Chandler, and Danilo Gallinari, I even have a couple of the same teammates as I did in that game. On top of all the other changes that were made to MyCAREER this year, I think that being able to play with the Nuggets again has really rekindled my interest in the mode, especially as I was planning on playing a lot more MyLEAGUE in NBA 2K17.

For what it’s worth, the Bulls currently aren’t too interested in me anyway. Checking out the Request Trade screen, it seems their interest level is only at 32%. On one hand, that’s a bit insulting given what I’m already achieving halfway through my rookie season, especially when my performance is compared to Rajon Rondo’s. Then again, they are third in the Eastern Conference at the moment, and probably anticipate having to give up Jimmy Butler or Dwyane Wade to get the deal done. I’ll be interested to see whether my stock rises with them, and other teams around the league, if I do lock up those awards and win a championship with the Nuggets. The other issue here is Justice Young. When requesting a trade in MyCAREER, it’s possible to ask to be traded with or without Young. That kind of sucks for him I guess, having little say over it and all, but at least it doesn’t have to be the end of Orange Juice. If I was to make my way to Chicago via a trade request, my first thought is that I’d like Young to come with me. The dual player controls are a nifty concept, and we have become a deadly one-two punch in the backcourt. I love racking up assists, and Young definitely makes it easier to fill the stat sheet in that regard.

Right now, this is still more than half a season away. As I said, since the team is on such a great run right now, I’d like to finish the season in Denver, and take the Nuggets all the way to the Larry O’Brien trophy. Still, whenever I’m shooting around on MyCOURT, glancing around at all that Chicago Bulls branding, I can’t help but wonder: is that where I’m supposed to be? Denver has turned out to be a good fit and I’m having a lot of fun playing for the Nuggets, but I can’t shake the thought that my destiny ultimately lies in the Windy City.