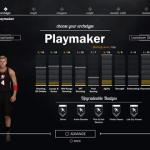 When the concept of MyPLAYER Archetypes was first announced for NBA 2K17, it struck me as being a very good idea. It seemed like a great solution to the issue of gamers creating maxed out 7’3″ players, a practice that frequently upset the competitive balance in modes such as MyPARK and 2K Pro-Am. On top of injecting a little more realism into MyCAREER, MyPLAYER Archetypes seemed to be a logical answer to egregious min-maxing and gaming of the upgrade system in order to create overpowered players.

I maintain that it was a very good idea in theory, and something that should remain in future NBA 2K games. However, MyPLAYER Archetypes haven’t been quite as effective in preserving competitive balance as I would have hoped, as some gamers are still creating cheesy players. Conversely, in other ways they’re too restrictive, allowing for little variation between certain playing styles. Since we’re in the thick of Wishlist season, I thought that I’d throw out a few ideas that could possibly improve MyPLAYER Archetypes in NBA 2K18 and beyond.

Let’s begin with the restrictive nature of certain MyPLAYER Archetypes. The current approach seemingly aims to ensure that each Archetype has at least one significant drawback. For example, if you choose the Playmaker Point Guard Archetype, you’ll be giving up a significant amount of upgrade levels for your outside shooting. Likewise, levelled-up Slashers are excellent at getting to the rim and finishing – as they should be – but their shooting ratings are also rather harshly capped. When you choose between the MyPLAYER Archetypes, you really have to weigh up the beneficial strengths against the glaring weaknesses. On the surface, this isn’t a bad thing. It makes it more difficult to create a ridiculously overpowered player, and in many respects, the strengths and weaknesses of the MyPLAYER Archetypes do realistically represent the different playing styles we see among NBA players. With that being said, we do see multi-talented players who have a hybrid of styles, or at the very least, are better in certain areas than the current MyPLAYER Archetypes would suggest. As a result, some Archetypes aren’t the viable options they should be, forcing gamers to pick between a few Archetypes that they can creatively min-max for online play.

So, how should Visual Concepts address this? Well, in NBA Live 16’s Rising Star mode, playing style determines “Key Skills”, which are cheaper to upgrade. If you focus on updating ratings outside of your core skill set, you can actually change your player type, too. This might not be feasible with NBA 2K, however, since there is a wider array of MyPLAYER Archetypes, and gamers can upgrade their players through microtransactions, which isn’t the case in NBA Live 16. The “Key Skills” concept might be one to borrow, but other aspects of the approach might not be a good fit for NBA 2K’s upgrade system.

It would be impossible to include MyPLAYER Archetypes for absolutely every type of NBA player we’ve seen – especially when the best of the best defy classification and pigeonholing – but it should be possible to develop into more of a hybrid Archetype. One way of achieving this would be to keep the current approach to level caps, but allow players to gain extra upgrades above the cap through putting in the work in training sessions. For example, if you wanted to be a Playmaker who’s a great outside shooter like Mark Price, Steve Nash, or Stephen Curry, it should be feasible by selecting the Archetype, and working on your three-point shooting in drills.

I also believe that certain level caps should be higher, or alternatively, the maximum rating at the current level caps should be increased. Ideally, I think this should be done in conjunction with the ability to level past the capped purchasable upgrades as described above, but at the very least, some caps and ratings need to be higher. It’s only fair, and realistic, that certain Archetypes are stronger in some areas than others. However, that doesn’t necessarily mean they should be worse than average in those areas, or that some skill sets aren’t mixed and matched. Not all Playmakers, Slashers, Sharpshooters, and Lockdown Defenders have the same game, after all. “Average” is the key word here. I would suggest that for areas that are intended to be the weaker parts of a player’s game, then the maximum achievable rating through purchasable upgrades should be around the league average. As a Playmaker, I’ve maxed out my Open Shot Three rating at 72; the league average rating at the point guard position is 80. I would also suggest that the starting ratings in areas related to the Archetype be higher, and cheaper to upgrade, similar to NBA Live 16’s “Key Skills” approach. Low starting ratings are a problem in general, but it’s silly that a top prospect should have key skills that are significantly below average.

Borrowing a concept from the Fallout series and other RPGs, another possible improvement would be the ability to nominate and “tag” a few key skills. These skills could start out higher, level up easier, have higher than normal caps, or ideally, all three. In addition to providing a leg up at the beginning of your career, it would also effectively allow you to customise MyPLAYER Archetypes. This would make it possible to create styles that currently aren’t represented, such as great lockdown defenders who are also deadly three-point marksmen, a la Bruce Bowen.

One final idea for customising MyPLAYER Archetypes would be to allow the increase of one area at the expense of another. For example, if you wanted to increase your three-point shooting cap, you could elect to do so, but it would involve sacrificing a level from post scoring, or some other area of your choosing. This would allow for some flexibility in the Archetypes while preventing players from becoming overpowered, as increasing the level cap in one area would either result in another area becoming much weaker, or alternatively, lower level caps across the board.

At the same time, there are areas where it would probably be a good idea to nerf some ratings, and adjust the impact of physical attributes. Creating a 7’3″ player with long arms shouldn’t be a quick route to being unstoppable on the offensive glass, or swatting shots. Depending on their ratings and other physical attributes – to say nothing of how well they’re being controlled by the user – they should fall victim to being effectively boxed out, outmuscled, and committing fouls due to a lack of defensive skill and body control. In short, cheesy builds should be difficult to create, and physical gifts should be combined with skill to be truly effective. I’d also suggest that certain Player Badges be more difficult to obtain depending on your Archetype, or have additional requirements. I’ve apparently set enough screens during MyCAREER to unlock a Brick Wall Badge for my Playmaker point guard. While it’s only a Bronze Badge, offering the lowest boost and unable to be upgraded, it seems a bit strange that a 6’4″, 208 pound point guard who hasn’t come close to maxing out his Strength rating can qualify for an attribute that’s really intended for big men with a lot of bulk and strength. Restricting Badges a little more would be a fair trade-off for higher level caps and ratings, and customised MyPLAYER Archetypes.

Once again, in the grand scheme of things, MyPLAYER Archetypes are a really good idea in terms of encouraging gamers to create realistic players, and preserving competitive balance in online play. They just need a little work, specifically a bit of tweaking and greater flexibility, to achieve greater success in NBA 2K18 and beyond. They’re more than functional in NBA 2K17, and I would suggest that they have had a positive impact, but there’s definitely still room for improvement when it comes to replicating different player styles, and making online players cut cheddar out of their diets.