Monday Tip-Off: Got Next Gotta Go in MyPARK 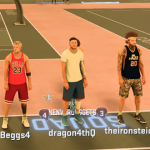 We’re at midcourt, and the ball is about to go up…it’s Monday Tip-Off! Start your week here at the NLSC with a feature that’s dedicated to opinions, commentary, and other fun stuff related to NBA Live, NBA 2K, and other basketball video games. This week, I’m tipping things off with my thoughts on the “Got Next” approach in MyPARK.

Along with the other members of NLSC THRILLHO, I’ve been finding 2K Pro-Am a little more frustrating than usual lately. The most recent patch opened up matchmaking across different tiers, which results in more games, but also frequently matches us up against Elite level teams who are more serious about online gaming, or have achieved that status through cheesy builds. We’ve still had some enjoyable games, but a few tough nights, combined with rising frustration with some of NBA 2K17’s issues, have encouraged us to head to MyPARK instead. After an enjoyable experience with Park After Dark #3, it’s something we’ll probably do more often.

Even though I generally prefer five-on-five gameplay with NBA rules, the streetball approach of MyPARK is a fun change of pace. I like the more casual atmosphere, and when there’s only three of us online, a three-on-three game without AI players of questionable skill level feels like a more streamlined experience. I find that I’m less frustrated, perhaps because even though I do want to win and we do compete, losses don’t seem to sting as much in shorter games. However, there is one frustrating element of MyPARK, and it’s something that’s always bothered me about the mode: Got Next. For me, Got Next gotta go.

Before I go on, I want to emphasise that I do in fact completely understand the Got Next concept, and why it’s a part of MyPARK. That’s how pickup basketball works, making it conceptually accurate, and from a technical standpoint, it’s perfectly straightforward and functional. Walk up and claim one of the free spots, or if you’re part of a squad, get to the squad waiting area before someone else and their crew does. You can take in the game while you’re waiting to play, and of course, back out if you want to try and get a game on another court. It emulates the experience of heading down to your local park to play basketball, and in that regard, it’s a sound idea. However, I do feel that it’s an idea that’s better in theory than in practice. With a limited amount of courts, each catering to teams of a particular size, it’s not always easy to get a game right away. There can be a lot of waiting around, and racing around MyPARK, in order to find the next game. I guess that’s supposed to be a part of the fun, and again, it certainly reinforces the concept of playing pickup basketball down at your local park. Personally, I just find it a bit tedious. As much as I want basketball video games to be realistic and innovative, this is one aspect of real life that I’m not sure NBA 2K should be trying to mimic.

Imagine only being able to play one game per day in a season/franchise mode, concurrent with the real NBA schedule. It’s a cool idea for a mode like Dynamic Season, but it wouldn’t be a good idea to implement that restriction across all forms of season play. A less extreme example would be presentation issues such as players slowly jogging the length of the floor to retrieve loose balls instead of there being a camera cut, and unskippable stats screens. I can appreciate that attention to detail, but there are times when it simply gets in the way. Sometimes, it’s appropriate for sim games to take a few liberties in order to streamline the experience.

When I jump online in NBA 2K or NBA Live, I generally want to get into a game as quickly as possible, and partake of as many games as I can in the free time I’ve set aside to play. By having gamers stake their Got Next claim by standing at the court, or waiting in line for Park After Dark events, MyPARK is literally emulating the most boring part of going to a park or nightclub: standing around and waiting to play or get in. At least with 2K Pro-Am, NBA 2K17 introduced the ability to keep shooting around in the team arena during the matchmaking process. As I said, MyPARK is a nice change of pace for me, but I dislike all the waiting with nothing to do.

To be honest, I wouldn’t mind a matchmaking system similar to Rocket League: squad up or go solo, and search for a game with as many different variations of play as you like, in order to get into a game wherever and as soon as you can. In this scenario, readying up for “Got Next” would essentially begin the matchmaking process, and in the meantime, you could continue to wander MyPARK and take in games. If you do want to challenge a particular squad who’s holding court, then perhaps you could still get in line and wait, similar to the current Got Next system. Maybe that would be too contrived; maybe I’m out of touch here, being a more casual MyPARK player. The mode certainly is popular, so it can’t be said that the current approach is driving gamers away. Again, I understand what MyPARK is going for, and that the concept is different to other forms of online play. I do like the idea of continuous play however, as is the case in 2K Pro-Am, LIVE Pro-Am, and online Rocket League. I’d prefer to be able to get into a game as quickly as possible upon travelling to MyPARK, and then play a bunch more games with minimal interruptions, without having to stand in a virtual line.

Again, MyPARK is extremely popular, so I’m probably in the minority as far as this complaint is concerned. If it was at all feasible to keep the current Got Next approach and implement a quick matchmaking system for gamers who want to streamline the MyPARK experience, then I believe that would adequately cater to both tastes. If nothing else, I’d at least like something to do while I’m waiting for a game in MyPARK; some sort of mini-game, or a shootaround as in 2K Pro-Am. I know, I know…they’re different concepts, and each mode should do its own thing. Still, if I wanted to sit there and watch someone else play, I’d hit up YouTube or Twitch.

Whether it’s replaced or expanded upon, I feel that something has to happen with Got Next, in order to cut down on all the waiting. More courts, instant matchmaking and continuous play, some sort of gameplay to pass the time apart from jogging around and rotating the camera to watch other people play; as long as it can alleviate the monotony of standing around in a virtual queue, I believe it’s an idea worth exploring in future iterations of MyPARK.