Monday Tip-Off: How Ratings Got Better in NBA Live 16 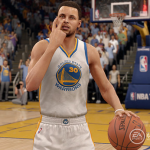 The official roster updates for NBA Live 16 haven’t exactly received universal acclaim so far. In addition to a couple of players still lacking proper faces, there have been lingering issues with missing players, incorrect jersey numbers, and other anomalies with player bio data, though subsequent updates have included several fixes on all those fronts. I do suspect that there may still be some issues with the update system that’s in place, and the lack of in-game roster editing functionality is sorely missed as a result. However, except for a couple of weeks over the holiday break, the weekly updates have been coming through consistently, and on time.

Each week, the official NBA Live website spotlights the biggest movers and shakers in the latest roster update, and there have been some significant ratings changes since NBA Live 16’s launch. Generally speaking, I feel that some really good work has been done with the ratings in the NBA Live 16 roster updates, as the season has progressed. Having made unofficial roster updates for NBA Live for many years, I appreciate the constant balancing act of not getting too carried away boosting and decreasing ratings, and the pain of getting overall ratings to look “correct”, without skewering the individual ratings to make it happen.

So, what stands out to me the most when it comes to the improved ratings in NBA Live 16?

First and foremost, there’s the handling of the top-rated players in the active roster. Leading up to the release of NBA Live 16, it was revealed that there were over twenty players rated 90 overall or higher, which definitely struck a lot of observers as being overkill. The number of 90+ overall players surprised me too, but I did want to reserve judgement until the game was released. After all, ratings scales have been known to change from game to game – as some of the underrated players back in NBA Live 2004 demonstrate – and the importance of overall ratings is often overblown. With hindsight being 20/20, I would now have to agree that having so many players rated that highly was indeed overkill, the result of a few too many over-inflated ratings. As such, it’s been great to see the number of 90+ overall players reduced to less than half the original amount as the weeks have progressed. As of the most recent roster, Stephen Curry stands alone atop the league at 95 overall, a stark difference from the original rosters which boasted a few players rated 95 or more. I think the game plays better as a result of the change (the title updates help too, of course), and it feels as though there’s an improvement in the differentiation between players.

The balancing out of player ratings reflects a consistent effort to make appropriate adjustments according to the ebb and flow of the 2016 NBA season. The biggest increases and decreases in player ratings over the eight updates so far represent a consistent ascent or decline in each case; there are no immediate ten point jumps or drops, with small adjustments and reasonable sample sizes backing up the changes to reflect recent slumps and hot streaks. When it comes to the biggest movers and shakers, it doesn’t feel like there have been any knee-jerk ratings adjustments.

As such, the top performers in the league this season are represented quite well with their current ratings, as are big names that have dropped off a little. This highlights another positive aspect of the way the roster updates have been handled thus far: there haven’t been any egregious “legacy” ratings that don’t match a player’s current performance. When a star has slumped badly, they’ve taken a hit. Kobe Bryant was originally rated 89 overall, but has since fallen to 80 in the most recent roster. As an all-time great, it might be tempting to cut him some slack and fudge his ratings a little, but he’s struggled mightily in his farewell tour, thus his ratings have been justifiably decreased as the weeks have gone by.

Likewise, breakout players who have firmly established themselves as being among the league’s elite have enjoyed a steady build to the point of being some of the highest rated players in NBA Live 16. It’s not unheard of for players to open the season on fire with unexpectedly big numbers, only to cool off and see their performance peter out after a few weeks. Such players invite premature ratings increases, but the roster updates haven’t jumped the gun on anyone, with improved players receiving continuous incremental boosts as they’ve proven themselves with consistently impressive performances. There’s been a little bit of movement at the top recently, with the players right behind Stephen Curry trading spots in the top five a few times, and there has also been a couple of ties. Once again, significant slumps and notable hot streaks have been well-accounted for, with a one or two point swing at most when overall ratings do fluctuate. Going back to what I said before about legacy ratings, even Curry himself has taken a small hit in past updates, when his raw stats and efficiency dropped slightly after he returned from a leg injury. Based on recent performances, the newly shortened shortlist of 90+ overall players is pretty accurate.

It just goes to show the value of continuing to update player ratings throughout the year. Obviously, I’d love to have roster editing functionality so that we could make changes ourselves, as well as the latest transactions, and share our own updates while we wait for the official releases. In the absence of that functionality, though, I’m glad to see such dedication to keeping the ratings updated, and such a good approach to making those adjustments as required.

As I said, I feel my experience in creating unofficial roster updates over the years has given me some insight into the process, and to be frank, ratings can be very tough. Slumps and hot streaks can begin and end abruptly, making good adjustments suddenly look bad. Unforeseen struggles and breakout seasons make opening night ratings particularly precarious. Rookies are very difficult to rate, as they’re unproven at the professional level. You generally want to err on the side of caution, but that can lead to underrating players, or overrating them if you’re giving a fading star the benefit of the doubt. In short, I can definitely appreciate the difficulty associated with maintaining rosters, and have a healthy respect for rosters that are well-made, official and unofficial.

I absolutely believe that the current approach to player ratings in NBA Live 16 is something that should be carried over into NBA Live 17 and beyond. It feels like they’re now doing something similar to the Hall of Fame ratings scale that has been employed in NBA 2K16, and I think this is another area where it’s definitely to their benefit that they take a page out of 2K’s book. Overall ratings of 90 or more should definitely be reserved for the top players with the best production, with the highest ratings in each individual category limited to the players who truly stand out in that area. The weekly adjustments have been well-handled, which I’d definitely like to see continue. The roster updates for NBA Live 16 have had their issues, there is room for improvement, and as I discussed in a recent Friday Five, we do ultimately need the ability to make our own changes. I am a fan of how NBA Live 16’s ratings have been handled post-release though, and to that end, I’d like to give credit where it’s due. As I said, rosters can be very tough, and ratings extremely finicky to nail down. Fortunately, ratings are much easier to fix than other issues with the games, and to that end, I’m glad to see consistent improvement, not to mention dedication to keeping them up to date. Without a doubt, EA’s official roster updates have certainly come a long way since NBA Live 99.

I have my issues with nba live’s roster management and have being outspoken about it but I will give credit where credit is due and that is that when I play the game as a quick pick up and play the players, for example Steph Curry play alot like they do in real life than I feel they do in 2k and the stat engine looks good in respect to that.

Not sure how the sim engine looks in dynasty mode as the season progresses as I gave up my kings dynasty 17 games in because truthfully the teams I wanted to use are full of place holder faces which really kills the feel for me quite a bit so hopefully that gets addressed soon since the game has being out for nearly four months now!

The sim engine is pretty good, it’s been solid the past few years compared to the last two pre-reboot games (NBA Live 09 and NBA Live 10). While there’s a lot I’d like to see done with Dynasty Mode, that has been pleasing to see.